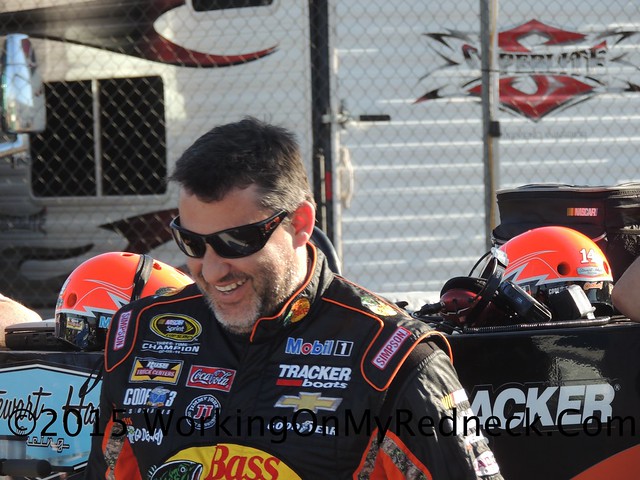 Tony Stewart has been in the headlines quite a bit recently, however, not for reasons he and his fans grew accustomed to during his peak years in the NASCAR Sprint Cup series.

Instead of making the news for winning races and championships, Smoke has largely become a punching bag in the public spotlight.

The three-time Sprint Cup champion will hope to avoid this kind of scrutiny when he retires to his short track roots following the conclusion of the 2016 season, but will he return to winning form or follow the recent trend of being a back marker?

Much has been written about Stewart and his struggles since his severely broken right leg in a Sprint Car crash in August of 2013, but the signs of decline predate that injury with Stewart not finding much success with crew chief Steve Addington that year. At the time of his crash, Stewart was 11th in the standings after spending much of the year outside of the top-20. He was starting to synchronize with Addington, but neither the sport nor his fan base. will never know if that was a sign of things to come or closer to a well-timed hot streak.

Next came 2014 and the tragic incident at Canandaigua Motorsports Park. But like the year before, it’s not as if Stewart was finding any sort of success in the Sprint Cup races before his extracurricular activities resulted in missed time at the track.

Stewart was deeply mired 19th in the championship standings and struggling to crack the top-10 with any real regularity. For whatever reason, and perhaps a variety of them, one of the most feared competitors of all time was relegated to a non-factor, A mid-packer, on the largest stage in stock car racing.

An honest look at Stewart and his recent statistics reveal several notable culprits. The most notable is the high-downforce Gen-Six race car that has taken success largely out of the hands of the drivers and placed them on the engineering front.

Stewart, accustomed to driving high speed and low downforce cars throughout his heyday, has been completely neutered by the recent technical changes that have spread across the Sprint Cup Series. Even Stewart himself admitted last year that the current rules just don’t match-up with his skill set, and the results have reflected it.

Even though the lower downforce rules for 2016 will aid Stewart to a certain degree, NASCAR and its crew chiefs expect most of the downforce to be re-engineered back on the cars by the end of spring. So if the Gen-Six car is to blame for the fall of Tony Stewart, then there isn’t much hope coming in the form of the 2016 rules changes.

Respectfully, Stewart also likely bears some degree of responsibility for the fall-off in his performance, based on his physical appearance. Stewart’s weight and conditioning has fluctuated over the past five or six years.  There is no doubt that it is a byproduct of the stress from the upcoming lawsuit and various rehabs processes during this period of his life.

The length of the races in the Sprint Cup Series are incredibly taxing, and it’s no surprise that the more athletic drivers have enjoyed a vast majority of success in recent seasons.

Stewart addressed this during the NASCAR Media Tour last week and says he has adjusted his diet and lifestyle in order to begin losing weight by the start of the season next month. The former IndyCar champion has resolved to leave nothing on the table in his final season and has taken multiple steps within his organization to achieve his remaining goals.

Smoke hasn’t won a race since 2013, hasn’t made the playoffs since 2012, and is still looking for his first Daytona 500 victory. To that end, he’s replaced former crew chief Chad Johnston with Michael Bugarewicz, and hopes the same organization that has supplied Kevin Harvick and Kurt Busch with championship caliber cars can do the same for him.  That could be a very tall order.

Stewart is arguably one of the greatest all-around drivers of his generation.  Like Gordon, Stewart will have a few physical questions to address and will need to gain momentum leading up to the playoffs.

It remains a fifty-fifty proposition to see if all the changes for the 2016 Sprint Cup season and Stewart Haas Racing will help Smoke return to Victory Lane. The Tony Stewart momentum will have to shift from reverse to drive if he is going to be able to drive to take his car to Victory Lane in his “farewell season”.

If I was a betting man, I would not be making a trip to the casinos in Las Vegas to put money on a bet that Tony Stewart will win the champioship, be in The Chase, or realistically that Smoke would win a race in his swan song to NASCAR.