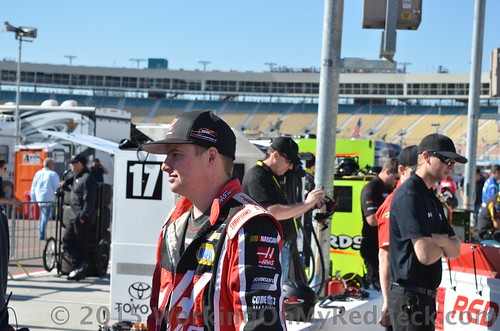 While the East Coast was dealing with one of the biggest snow storms in the last 100 years, I had the pleasure of pitting outside the box with the JR Motorsports Haas Automation #00 Camping World Truck Series driver, Cole Custer.

Even though the hub of NASCAR is located in Charlotte, NC, Custer  grew up far away in the Southern California play land known as Ladera Ranch, CA.  For all you non SoCal race fans, Ladera Ranch is south of LA near Mission Viejo, down in the OC (Orange County).

In 2013, Custer joined the K&N Pro Series East, making his debut at Bristol Motor Speedway for Ken Schrader Racing. During the season at Iowa Speedway, Custer won the pole position, led every lap, a record for a combination race, and won, becoming the youngest race winner in K&N Pro Series history at age 15.  Beating Dylan Kwasniewski’s record by six months. Custer would win again at New Hampshire Motor Speedway, also from the pole. He finished eighth in the series standings. Custer later ran in the K&N Pro Series West’s season-ending race. Custer led every single lap, but was turned by Gray Gaulding on the final lap and finished sixth.  (I was in the grandstands at Phoenix watching this very exciting race with these two youngsters really getting after it!)

In 2014, Custer joined Haas Racing Developments to run nine races in the NASCAR Camping World Truck Series, making his debut in the Kroger 250 at Martinsville Speedway. Custer started the race 9th, and finished 12th. In qualifying for the Drivin’ for Linemen 200 at Gateway Motorsports Park, Custer set the track record with a 136.426 MPH lap speed, becoming the youngest pole winner in NASCAR history.

At New Hampshire Motor Speedway on September 20, 2014, Custer won the Camping World Truck Series’ UNOH 175 from the pole, becoming the youngest winner in the history of NASCAR’s national touring series at 16 years, 7 months and 28 days.

On January 12, 2015, JR Motorsports announced that Custer would drive a truck for them in ten races in 2015. On June 13, Custer won the Truck race at Gateway Motorsports Park, holding off the No. 23 truck of Spencer Gallagher, after the dominating trucks of Erik Jones and Matt Crafton were involved in two wrecks at laps 142 and 152.

Let’s take a few minutes to pit outside the box with this young gun!

Leon Hammack:  Cole, when did you first decide that you wanted to be a race car driver?

Cole Custer:  My dad has always been around racing and he would  take me with him.  Probably when I was about 5 years old I decided that I really wanted to race cars.

Cole Custer:  When I was 5 years old my dad put me into a quarter-midget.  We raced all around the area where I grew up and I raced at many of the tracks in and around LA.

LH:  What was your progression through your young racing career?

CC:  After racing quarter midgets for a few years, I began racing Ford Focus Midgets when I was about 12 years old.  When I turned 14 years old I began racing Late Models.

LH:  How did your racing deal with JR Motorsports come about?

LH:  Now that you are with JR Motorsports, racing the truck for the full season, do you think that you may be able to put together a deal for a few XFINITY races in the JRM #88?

CC:  Well, that could be a possibility, but I am really just focused on the Truck Series, winning races, and winning the championship this year.

LH:  Does JR Motorsports build, prepare, and house your truck?

CC:  Yes they do,  but the truck team is not housed in the main building.  The truck team is in a separate building offsite from the main facility.  It is in the building that where JR Motorsports used to house their late model team.

LH:  What is your relationship with Stewart Haas Racing, Gene Haas, and Tony Stewart?

CC:  My dad works with this organization, so I have a very good relationship with Stewart Haas Racing.  I have known Gene Haas since I was five years old and it is an honor to be associated with him and he  is a great role model.

Tony Stewart, being a Sprint Cup driver, is very busy.  I do remember that after one race Stewart sat me down and had a talk with me.  He told me that I need to be more patient, focused, as well as learning not to get overly frustrated or upset.

CC:  My goal is to win races and to win the CWTS championship for 2016.

LH:  Cole what do you see yourself doing in five years?

CC:  That could be possible, but again I just want to focus on this year, by winning races and the championship.

LH:  Who has been the most influential person in your racing life?

CC:  It is definitely my dad.  He has guided my racing career from the very beginning.

LH:  What has been the biggest obstacle or roadblock in your career so far?

CC:  Probably the biggest obstacle is for me to learn how to give good feedback to my team in order to make the truck better and more competitive.

LH:  What advice would you give to a youngster who wants to become a race car driver?

CC:  The best piece of advice that I could give someone is to stay focused on your goals 100%.

LH:  What has been your biggest lesson that you have learned in your 18 years?

CC:  You need to be patient!  When we ran a partial schedule I was just going for wins, since I wasn’t racing every race and not going to gain points every race.  But now that I am going to running a full time schedule, I have to learn to be patient and pace myself.

Now that you have gotten a feeling of what makes this young gun tick, keep your eyes and ears open regarding Mr. Custer.  It is my opinion that you will be seeing and hearing a lot more from this driver and team in 2016.

It is also my humble opinion that you most likely will be seeing this driver in the hunt for the championship when he rolls into Homestead in late November.

One Comment on “One On One With CWTS Driver Cole Custer”