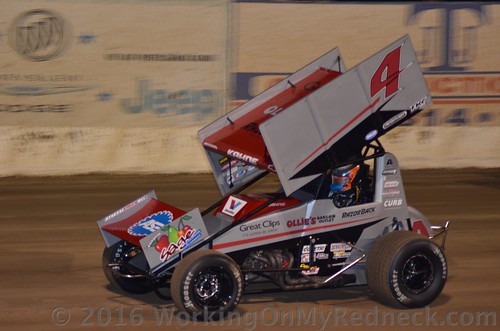 After watching Kasey Kahne race the last two races at The Winter Heat Sprint Car Showdown at Cocopah Speedway just outside of Yuma, AZ, I was wondering if Kahne could manipulate a few more sprint car races each year from Hendrick Motrorsports. Kahne said Friday that he’s looking to run between six to 10 winged sprint car races during the NASCAR Sprint Cup season.

It would be the first time since 2012 that Kahne has raced winged sprint cars during the NASCAR season. He does admit that it has been a challenge to convince his boss, Rick Hendrick, to let him do that.

“It’s been … two-and-a-half years of meetings and conversations and finally got it,’’ Kahne told NASCAR Talk

Wow, that would indicate that Mr. Hendrick has had a huge change of heart over the years!

Asked why he’s changed his stance and will allow Kahne to run winged sprint cars during the NASCAR season, Hendrick was surprised he had.

“I think he and I need to talk about that a little bit,’’ Hendrick told NASCAR Talk. “I don’t think we got any further than Australia. I don’t think we crossed into this year yet.’’

Kahne finished a career-best fourth in points that season – his first at Hendrick. He won the Coca-Cola 600 and at New Hampshire that season. Kahne finished 15 points behind Jimmie Johnson, who was the top Hendrick driver in the points and won five races.

The notion of drivers racing in other series, particularly sprint cars, was scrutinized heavily after Tony Stewart suffered a season-ending injury in a sprint car crash in Iowa in Aug. 2013. Personal Injury Law Firm in Washington and other accident lawyers could help analyze it with their experiences in such cases.  Kahne’s racing was questioned by some in July 2011 when video emerged of his sprint car flipping over the fence at Williams Grove Speedway in Mechanicsburg, PA, even though Kahne was uninjured in that event.

Kahne said he understands that any winged sprint car racing he does would be limited.

“I have too many sponsors, Mr. (Hendrick) and so many people relying on me to run well and perform,’’ Kahne said of his NASCAR effort. “I don’t want to effect that in any way. I don’t want any of that to interfere. To not interfere, there’s just not a bunch of races you can do. I think six to 10 would be a pretty decent number.’’

Kahne is not sure exactly what races and where he would like to run his sprint car in 2016..

“The only weekend I’ve thought about is Easter weekend and there’s not a lot of races to choose from,’’ he said. “I think Pennsylvania might have a couple good shows that weekend.’’

It will be very interesting to see who will prevail in this discussion, Kasey Kahne of Mr. H!