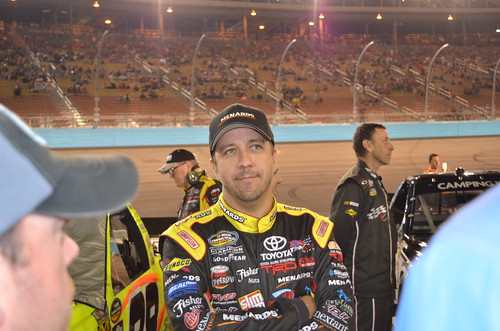 (WOMR file photo)
I became a NASCAR fan during the summer of 2010. My first race I ever watched was the last Camping World Truck Series (CWTS) Race at Gateway International Raceway. At the beginning of the race my buddies told me “Hey rookie pick a driver for the Truck Race.”  Heck not knowing a darn thing about NASCAR I choose the bright neon #88 with Menards on the hood. After doing some research on my new driver I noticed that Matt Crafton was born and raised in Tulare, CA which was only 20 minutes from my hometown of Porterville, CA. It is so exciting to not only have a hometown boy be your favorite CWTS driver but just have a friendly down to earth family man that drives a bright neon Toyota truck.

After a few races into watching this awesome sport, I choose the other bright yellow neon but on the Sprint Cup series side #27 Paul Menard. In the fall of 2012, and having only two seasons of racing under my belt, I was asked to help run a facebook page called Nascar Off Track. The owner of the page eventually left and it was just me running a page with just under 150 likes. I worked so hard in boosting the likes and currently it has over 15,000 likes. Looking back on all that I have accomplished it makes me smile and just say NASCAR is an awesome sport.

All about #88 Matt Crafton

Matt Crafton was born on June 11, 1976 in Tulare, California. He went to Tulare Union High School and graduated in the summer of 1995.

He began racing at the age of seven, after receiving a go-kart as a gift for completing kindergarten. Matt won numerous regional and national go-kart championships before moving on to midgets, micro- sprints and late models.  Matt’s father Danny Crafton had a legacy in West Coast late model racing, and when he was injured with three races remaining in the 1996 season Danny chose Matt as his substitute driver. Matt’s performance in those races led Danny to hang up his helmet and step out of his familiar # 46 to make room for his son. Matt made his dream a reality in 2000 by winning four races and the NASCAR Featherlite Southwest Tour championship.

Matt made his Camping World Truck series debut at Auto Club Speedway in the 2000 season finale where he finished ninth. Matt then received a full-time ride and sponsorship with ThorSport Racing.  He had eleven top 10’s and finished twelfth in the championship standings.  Menards came on board in 2002 joining the team as an associate sponsor.  During that season he earned six top 10’s and he finished fifteenth in points. The folloowing year, 2003,Crafton earned eleven top 10’s before finishing eleventh in points.

In early 2004, Matt was hired by Kevin Harvick Incorporated (KHI) to pilot their #6 Chevy Silverado. He posted a best finish of third in two different races and he finished the season fifth in the CWTS final standings.  In 2005 Crafton was released from KHI and returned to ThorSport.

From the 2005-present, Matt has continued to race for Thor-Sport Racing and he posted 3 wins, 175 top 10’s, and 7 pole positions. The milestone accomplishments during this period were:

But that was 2015, and this is the beginning of the 2016 CWTS season.  I think that you should keep your eyes on that Menard’s #88 ThorSport Toyota Tundra because Crafton will be in the mix for the championship when the series rolls into Homestead for the last race in November.

The Bucked Up 200 Preview

The Trucks Unload At Vegas

Another First Time Winner At Vegas?