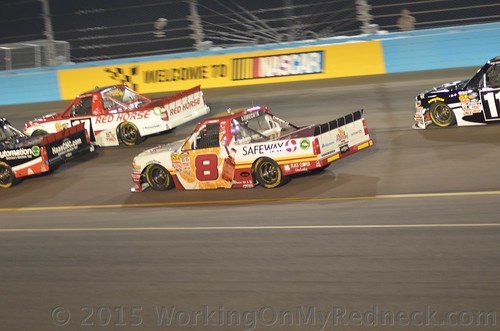 It was bound to happen sooner or later that NASCAR would put into play a “Chase style” playoff for their other two touring series, XFINITY and the Camping World Trucks.

The sweeping changes to both series were announced during the NASCAR presentation that opened the three-day Charlotte Motor Speedway Media Tour. The move brings the other two national series in lockstep with the NASCAR Sprint Cup Series, which first instituted the Chase playoff system in 2004 and moved to its current format with a major overhaul ahead of the 2014 season.

“I think it’s important the (young drivers) understand how difficult it’s going to be when they get to the Sprint Cup level,” NASCAR CEO Brian V. France said of aligning the postseason format among all three series.

In the XFINITY Series, drivers will vie for 12 postseason spots, clinching berths by winning a regular-season event or carrying a high enough rank in the series standings. The XFINITY Series’ playoffs will begin Sept. 24 at Kentucky, then the field will dwindle from twelve drivers to eight after events at Kentucky, Dover and Charlotte. Races at Kansas, Texas and Phoenix will trim the field from eight to four championship-eligible drivers.

A win in the first 26 races for the XFINITY series, and being in the top 30 in points, will all but guarantee a spot in the elimination rounds.

In the Camping World Truck Series there will be eight spots available for the playoffs. Races in New Hampshire, Las Vegas and Talladega will carve the field from eight drivers to six. Martinsville, Texas and Phoenix follow, with the three-race series determining the final championship-eligible four.

Each postseason grid for both XFINITY and CWTS will be set after September’s race weekend at Chicagoland Speedway. Prospective playoff drivers must have attempted all regular-season races and rank in the top 30 in the points standings.

Additionally, steps were also taken to rule Sprint Cup Series drivers out of the season-ending races for the other two national series. Any driver that qualified for the 2015 Chase for the NASCAR Sprint Cup is not eligible to compete in either the XFINITY or Camping World Truck Series finales.

It would appear that those double and/or triple dippers are ruled out of competing in the these two series playoffs.  Since a driver can only compete in one series for points, those Sprint Cup drivers from say Joe Gibbs Racing, Stewart Haas Racing, and Hendrick Motorsports, for example, would be barred from competing in these two series’ playoffs.

I can’t wait to see how these two series will perform in their version of The Chase for their particular series. My personal opinion is that the institution of playoffs for both the XFINITY and Camping World Truck Series were long overdo!

I think that this will add another level of interest for the fans.  If the truth be known, my personal choice for the best bang for the buck as a spectator is the CWTS.  These races are shorter than either Cup or XFINITY races, which makes for more action, tighter racing, and a larger sense of urgency!