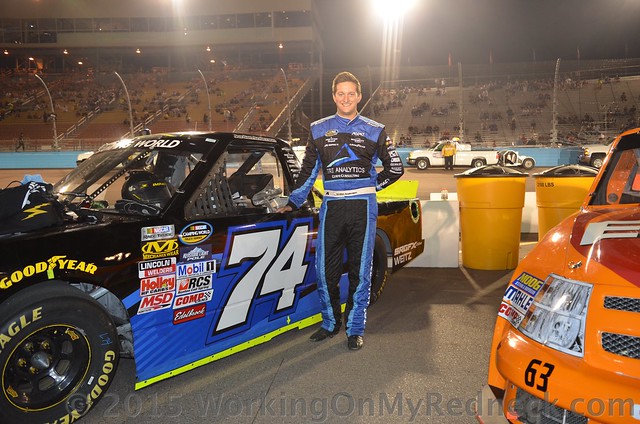 If Jordan Anderson wanted to write a book on his rookie season in NASCAR’s Camping World Truck Series, he wouldn’t be short of stories.

From driving cross country to Las Vegas, scrambling to find a passport for a race in Canada and several late nights preparing his truck to go to the track, Jordan experienced just about everything in his first year in the NASCAR Camping World Truck Series.

Despite the challenges of being in an underfunded, single-truck team, Anderson found enough sponsorship to drive in 17-of-23 races this season. His best finish was 13th at Michigan International Speedway, which he called “like a victory” for the team. He finished 19th in the series points and made his debut in the Xfinity Series on Aug. 21 at Bristol Motor Speedway on a weekend in which he failed to qualify for the truck race.

“This year almost been like a movie, all the things we experienced and been through. Being the underdog on a team and against guys that have like 20 or 30 crew members working on a truck,” Anderson said. “So, for us to be at the race track every week has been an honor. The plan for us was to run Daytona and anything was a bonus, so running almost a full schedule was a dream. There were a lot of cool moments and looking back, you get caught in moment sometimes during the season and don’t appreciate it. But it definitely was a year I will remember.”

Anderson said he has spent some of his time off reflecting on the season, which was his first full year on any level since 2011. After spending some time with friends and family for the holidays, he is in the process of lining up everything for the upcoming season and hopes to have things wrapped later this month in time for the season opener in Daytona next month.

Unlike drivers in bigger organization, Anderson’s responsibility is more than just driving on the weekends. Anderson, who earned a business degree at Belmont Abbey, is involved in drumming up sponsorship anyway he can throughout the season. He is his own public relation person, helped designed paint schemes, and worked on his truck before getting it to the track and when he got there.

For last year’s opening race at Daytona, Anderson and his crew finished at 2 a.m. in Charlotte, before he and his father, who spotted for him during some races, drove to Florida to be at the track at 10 a.m. that day.

Anderson’s full-time crew each week consisted just of him, crew chief Dan Kolanda and one other person.

At most weekends at the track, Anderson assembled a make-shift crew or had members from other teams help with pit stops or even to help pull the car through inspection each week.

Anderson had just one truck to make it through the year, so it was important he learned to take care of his equipment during his schedule. If he would wreck, that might mean Anderson’s season might be in jeopardy.

And just getting to the track wasn’t an easy task. Anderson drove the team’s hauler to the track on most weekends and had plenty of adventures on the road to tell. He ended up staying in Iowa for nearly a month when his hauler broke down twice after back-to-back racing weekends in St. Louis and Iowa.

That was just one of many instances like that during the season. In August, Anderson had to scramble for a passport when he found out he would be driving in the truck series race in Canada. He drove to Atlanta on a Tuesday to get the passport. The next day, he drove his hauler by himself 17 hours to Canada.

After the race, Anderson spent some extra time at the border in customs for several hours as custom agents interviewed him and made sure nothing illegal was coming back in the country.

“That was a trip I would never forget. I just wanted to get back home,” Anderson said. “But you just had to laugh at stuff like that and things that happened on the season.”

Anderson said one of his best off-track experiences came when he and a team member drove the team’s hauler cross-country trek to Las Vegas for the race there in October. A month later, Anderson did the cross country trip again for races at Texas and Phoenix before driving to the finale at Homestead Miami Speedway.

“That was a bucket list of my things to do was just drive cross-country. If you are on a big team, you go in a plane to the track and don’t get to experience things like that. I got to experience the different restaurants and sights you wouldn’t normally get to,” Anderson said. “Nothing has been easy this year. We had to work for everything but it made it so much rewarding.

“Hopefully, this offseason, we can get things built up, have a few more trucks we can use and keep this thing going in the right direction.”

If you want to read more about Jordan Anderson, you can read the interview that I conducted a few months ago with Jordan.  It will enlighten you about where this hard working young man came from, and you will seee that Anderson is driven to accomplish his goal of making it in NASCAR.

After working with Jordan to put together that interview I came away with a better understanding of what it takes for a very underfunded NASCAR truck team with minimal workers to try to work on the truck, gather sponsorship funding, haul the truck from track to track, and prepare it to race at all the different tracks that the Camping World Truck Series competes at during the season