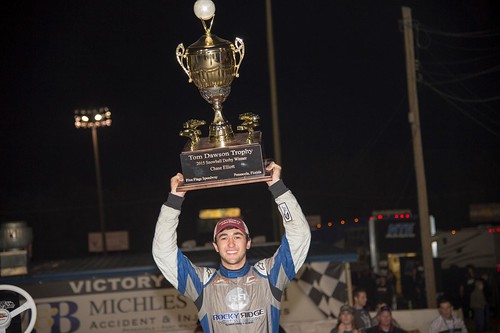 (Editors note: WOMR would like to welcome two writers, Shane and Alicia Smith, to the staff.  Here is Alicia’s first installment for WOMR.)

The NASCAR World was buzzing like bees in a damaged hive last Sunday and into Monday morning about the outcome of the 48th annual Snowball Derby Super Late Model Race at the Five Flags Speedway in Pensacola, Florida.

The biggest chatter going on was of the eventual race winner Chase Elliott and the driver who crossed the start-finish line first.

Christopher Bell, who won the Camping World Truck Series Race at Eldora last July, took the checkered flag in his Kyle Busch Motorsports (KBM) late model before being DQ’d (disqualified) less than one hour after the race for failing post-race technical inspection. This led to Elliott, who finished second in the race, being declared the official winner. Bell was scored 37th, or last place.

The Snow Ball Derby is a 300 lap race on a ½ mile oval. This race is the World Series of late model races and has propelled the careers of several drivers. Elliott won the event back in 2011, additionally Eric Jones turned heads in 2012 when he outdueled Kyle “Rowdy” Busch for the win.

There are two ways to look at this race.  It is either the race that caps off the whole NASCAR season, or it is a preview of the up-and-coming racing talent that you will be hearing from in the not too distant future!