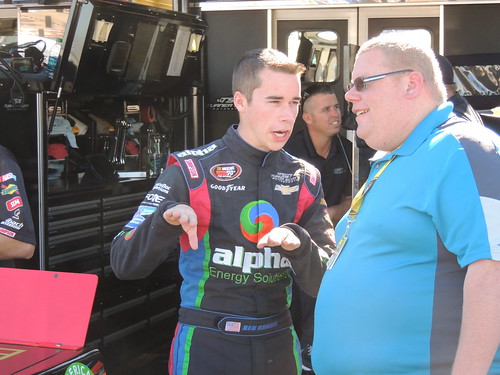 (Editor’s note:  WOMR would like to welcome Shane Smith to the WOMR staff.)
Ben Rhodes made the announcement that he will drive in the NASCAR Camping World Truck Series in 2016 for ThorSport Racing.

Rhodes is going to put the pedal to the metal piloting the ThorSport Racing #41 Toyota Tundra as he competes for the CWTS Sunoco Rookie of the Year honors.

Rhodes stated in a press release “I’m grateful for the opportunity to race full time with ThorSport Racing next season and I was excited when I received the phone call. ThorSport has won two of the last three CWTS championship titles, has drove to Victory Lane multiple times, and all three of the Toyota’s were within the top six in points. I feel confident I am joining a team that will be able to produce top-notch Toyota Tundras for me to contend for poles, race wins, Rookie of the Year honors, and the 2016 championship.”

In 2015, Rhodes drove 10 races for JR Motorsports in the #88 Chevrolet in the NASCAR XFINITY Series. He had 2 top-10 finishes, and his best result was a 7th place finish.  That occurred in his debut at the Iowa Speedway in May.

“The 2015 season was a great way to get my feet wet in the upper levels of NASCAR,” Rhodes said. “I gained a lot of knowledge on how things work, and I feel as though I’m ready for a full-time ride. That is why I’m looking forward to the 2016 season with ThorSport Racing. I will have a crew chief that I can work closely with week to week, and a team that knows what driver will be in the seat every race. We can focus on being successful, starting at Daytona and ending in Homestead Miami.”

This is not Rhodes’s first time in a NASCAR Truck. In 2014, he drove in four races, notching a top five and three top 10s. He is a two-time member of the NASCAR Next Class, and he is also the 2014 NASCAR K&N East Champion.

“I’m looking forward to returning to the Truck Series,” Rhodes said. “With only 10 races in the NASCAR XFINITY Series and four in the Camping World Truck Series , this is a huge step forward for me. The Truck Series is extremely competitive, and I am up for the challenge.”

In January, Rhodes’ crew chief, paint schemes, and all additional sponsors will be announced. Rhodes did say on Twitter that his crew chief is going to be Kevin Bellicourt, who served as the championship-winning crew chief for William Byron in the NASCAR K&N East Series in 2015.