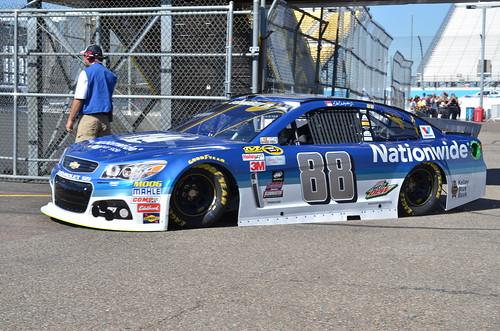 A serendipitous sequence of pit stops and a drizzle that turned into a downpour made a winner of Dale Earnhardt Jr. in Sunday night’s Quicken Loans Race for Heroes 500 at Phoenix International Raceway, the start of which was delayed from day to night by rain in the afternoon.

But the race that was halted by the rain 93 laps short of its scheduled distance of 312 laps was hardly the satisfying conclusion Carl Edwards, Brad Keselowski, Kurt Busch or Joey Logano had hoped for.

Those four drivers were eliminated from the Chase for the NASCAR Sprint Cup, as defending champion Kevin Harvick, Kyle Busch and Martin Truex Jr. joined Jeff Gordon in next Sunday’s Championship Round at Homestead-Miami Speedway (3 p.m. ET on NBC).

Earnhardt came to pit road for fuel and tires one lap before Joey Gase and Ricky Stenhouse Jr. crashed in Turn 3 to bring out the second caution of the race on Lap 196. While on pit road, Earnhardt crossed the scoring line at the flag stand before Harvick, who had dominated with 143 laps led, got to the stripe.

And when other lead-lap cars came to pit road under the yellow, Earnhardt inherited the top spot, with Harvick second and Logano third. Before track workers could complete clean-up from the accident, rain began to fall, and NASCAR called the race after the light precipitation became a deluge.

“We had an idea that the rain was in the area, but all the circumstances that played out at the end of the race are just kind of luck, I think,” said Earnhardt, who won for the third time at Phoenix, the third time this season and the 26th time in his career. “I want to give (crew chief) Greg (Ives) a lot of credit, and the guys.

“They gave us a good enough car to come here and qualify well (third). I think the reason why we won this race is because of the way we qualified to give ourselves a position to be up front all night. When something like this quirky happens we were able to capitalize. It’s a rain-shortened win, but my guys are very proud of it because of how the car ran all weekend and we put ourselves in this position.”

The third-place qualifying effort also gave the No. 88 team third pick of pit stalls, and that choice also proved crucial because it put Earnhardt in position to take the lead when NASCAR called the caution.

Harvick had mixed feelings about his second-place result. The caution likely cost him a victory, but it also assured his eligibility to defend his title at Homestead.

“Yeah, it’s kind of bittersweet,” Harvick acknowledged. “The car just really performed well today, and we were able to lead a lot of laps, and just really proud of the guys for the decisions that they made overnight to get that last little bit out of the car today, and how it performed was really good.

“Just caution came out at the wrong time, and we didn’t get to make up the ground on the race track under green, where Dale was pitted, and the way that they came out of the pits just didn’t time out well. But still proud of our group, and sometimes you win some of those things, sometimes you don’t, but in the end, the big picture is what it’s all about.”

Kyle Busch continued his improbable run toward a first series title with his fourth-place finish on Sunday. Having suffered a broken right leg and left foot in the season-opening NASCAR XFINITY Series race at Daytona, Busch missed the first 11 Sprint Cup events of the year but came back to win four times shortly after his return.

With the wins and a top-30 points finish, Busch qualified for the Chase.

“When I returned, we did a good job and we won four out of five and put ourselves in a position to make the Chase, and the rules are the way the rules are, and we’re going to make the most of it,” Busch said. “We’re playing with house money, and we’re rolling to Homestead.”

Truex, who entered Sunday’s race with a seven-point lead over Edwards, lost a lap during the same sequence of pit stops that put Earnhardt in the lead, but he regained it under the caution on a wave-around and finished two spots behind Edwards to clinch his place in the finals.

“With the way our stuff has been running here lately, it’s been really good, and we were really strong at Texas (last week),” he said. “I feel like what we’re taking there (to Homestead) might be a little bit better.

“Excited to get to Homestead, which has been a really good track for me over the years, and get a chance to pull off our first win there.”

Logano, Keselowski and Kurt Busch (who was hit with a pass-through penalty for jumping the start of the race) needed to win on Sunday to make the finals. But the rain made sure they never got a chance at another restart.

Logano took the disappointment with grace.

“It’s hard to play the race with rain in the area,” Logano said. “You don’t know what’s going to happen, but you just hope there’s another shot. You hope that there’s a restart and if two of them slip up and you’re able to put it three-wide on the bottom, or do something like that — but just didn’t ever have the opportunity there at the end.

“We had plenty of opportunities to try to get ourselves to the front, we just weren’t as fast as the 4 (Harvick). We were a solid second-place car, but Junior timed it out really well when they pitted to that caution, and it worked out really well for them.”

Note: Chevrolet clinched its 13th straight manufacturer’s championship in the NASCAR Sprint Cup Series, 39th overall… Hendrick Motorsports swept the Eliminator Round of the Chase with Gordon winning at Martinsville, Jimmie Johnson at Texas and Earnhardt at Phoenix.