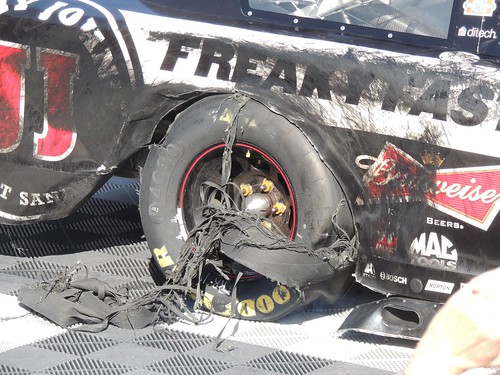 As the race teams readied themselves for Sunday’s AAA Texas 500 at Texas Motor Speedway, crew chiefs and drivers were left scratching their heads about how the opening laps would look.

Wet track conditions on Saturday forced NASCAR to cancel the two planned practice sessions, meaning teams would not be able to gauge tire wear over a long run. While the teams were able to practice on Friday morning, most of the teams spent that time in qualifying trim.

When Sunday’s race got under way on Sunday afternoon, it did not take long for tire issues to pop up. Chase driver Joey Logano was running fourth in the opening laps of the race when his left-rear tire exploded, going down the backstretch. The shredded tire destroyed the left-rear quarter panel of the car, brought out the first caution of the day and took the Team Penske driver out of contention.

On Lap 36, reigning series champion Kevin Harvick also had a flat left-rear tire, but the car did not suffer any damage. With just 54 laps to go, Harvick had another flat tire — this time it was the left rear. Harvick was forced to give up the second spot to hit pit road.

Crew chief Rodney Childers determined Harvick ran over a piece of debris on both occasions.

The tire problems were far from over, though. Dale Earnhardt Jr. had a right-front tire go down on Lap 50. Kyle Larson suffered two separate left-rear tire failures, on Lap 101 and Lap 232 of 334. Ryan Newman lost a left rear on Lap 145.

Kyle Busch had a tire come apart with 84 laps to go but was able to hit pit road and get a new set of “feel goods” without going a lap down.  Additionally, future race winner Jimmie Johnson had a left rear tire go down but was saved by a caution flag waving.
Despite the multiple problems, Goodyear’s director of racing, Greg Stucker, said it was a myriad of issues causing the tire failures in Sunday’s race, but he stood behind the compound. Stucker said both Harvick and Earnhardt ran over debris, which cut the tires.
Stucker pointed out that with no practice on Saturday, teams were unable to properly gauge the tire wear and find the edge.

He indicated that is why the same drivers seemed to have issues with their tires.

The tire compound used Sunday at Texas is the same that will be run in the season finale at Homestead-Miami Speedway.  Despite Sunday’s issues, Stucker said there was no concern looking ahead to Homestead.

Could we see more tire problems in the remaining two races is anybody’s guess!  But if there is another “tire crisis” in the remaining races then Goodyear will most likely be called to the NASCAR hauler for a come to Jesus meeting !