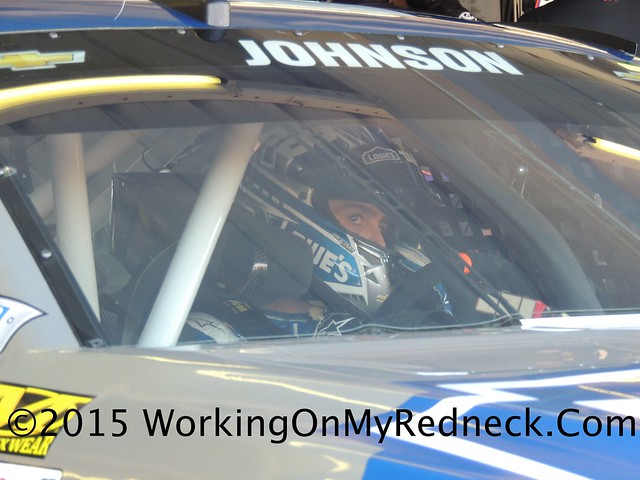 Johnson kept his record perfect, winning a race in the Chase for the NASCAR Sprint Cup for the 12th consecutive season. His fifth victory of the year was also his record sixth at Texas—including the last three in a row—and the 75th of his career, leaving him one win behind Dale Earnhardt,Sr., who is seventh on the all-time list.

Johnson, who only led six laps, harried Keselowski throughout the final 18-lap green-flag run, finally getting a decisive run on Lap 331.

“I just kept pressure on him,” said Johnson, who was eliminated from the Chase in the opening round. “I could see that he was really tight, and that was the first I had seen him that vulnerable all day. I just kept the pressure on him, kept searching for line. He saw me coming on the top and protected it.

“I just kept trying to put pressure on him, hoping for a mistake. He got real loose off of Turn 2, and I had a big run down the backstretch and drove it in really far into Turn 3 hoping to hear ‘Clear’ (from his spotter). Once I did, I knew I was home free.”

For Team Penske, on the other hand, Sunday’s race could be more aptly named the Heartbreak 500. Needing a victory at Texas or Phoenix after last Sunday’s Martinsville crash at the hands of Matt Kenseth, Joey Logano courted catastrophe on Lap 9, blowing a left rear tire and destroying the left rear quarter panel of his No. 22 Ford.

Logano finished 40th, 68 laps down, and remained last among the final eight eligible Chase drivers heading to the final Eliminator Round race at Phoenix, where he must win next Sunday to advance to the Championship Round.

Fate waited much longer to undo the winning chances of Keselowski, who led 312 of 334 laps but finished in the runner-up spot, 1.083 seconds behind Johnson.

Keselowski held a two-second lead over Martin Truex Jr. when NASCAR called a debris caution with 24 laps left. Those two drivers rubbed fenders soon after a restart on Lap 317, with Keselowski holding the top spot until Johnson passed him for the win through Turns 3 and 4 on Lap 331 of 334.

“The 48 (Johnson) car had mega turn (through the corners) that last run, and I couldn’t keep the turn, and it kept pushing real bad,” Keselowski said. “I did everything I could to hold him off, but he was way faster that last run.

“Their team did a hell of a job and found speed, and my team did a hell of a job, too. We led 300-some laps, and these debris yellows always favor someone, and it wasn’t our day for them to favor us. I’m still very proud of our effort today. We’ll have a great shot at winning next week. We really needed to win this one, and I know I gave it my all.”

Kevin Harvick ran third, overcoming two cut tires and a shifter he had to hold in place with his right hand to prevent the No. 4 Stewart-Haas Chevrolet from popping out of gear. The reigning series champion is third in the standings heading to Phoenix, where he has won seven times, including the last four straight.

Kyle Busch finished fourth and moved into sole possession of second in the Chase standings, two points behind Jeff Gordon, who punched his ticket to the Nov. 22 season finale at Homestead-Miami Speedway with last Sunday’s victory at Martinsville.

Carl Edwards came home fifth, the same position he occupies in the standings, seven points behind Truex in fourth, currently the last transfer position into the Championship Round. After the contact with Keselowski’s Ford, Truex dropped from second to eighth in the closing laps.

Next week at Phoenix, the penultimate race for the 2015 season, promises to have drama and excitement.  You know the old saying; “The thrill of victory and the agony fo defeat!”  Well, that will be an understatment when the checkered flag falls and the sun sets at PIR.