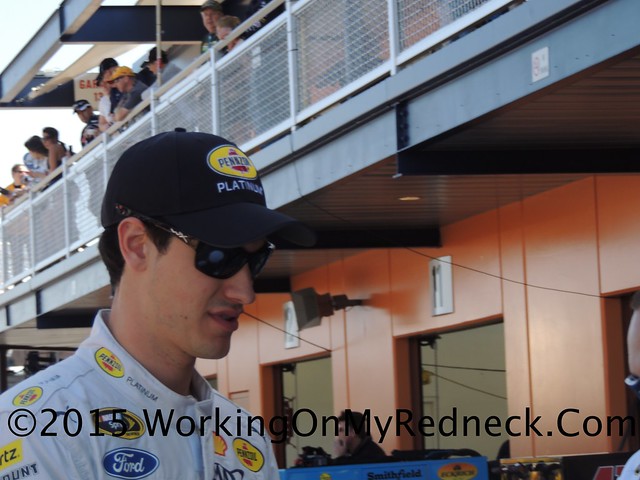 Through no fault of his own, Joey Logano may have achieved the most unpopular sweep in NASCAR history on Sunday afternoon.

Why, you may ask could that be so?

Because Logano’s victory in the CampingWorld.com 500 at Talladega Superspeedway knocked Dale Earnhardt Jr. out of the Chase for the NASCAR Sprint Cup, by just a matter of inches.  Had the officials waited just a few more seconds before throwing the caution flag, Earnhadt,Jr. would have eeked out a lead and a victory over Logano changing the outcome of the race and The Chase!

When NASCAR threw the third caution of the race moments after the first bona fide attempt at a green-white-checkered-flag restart on Lap 195—with Kevin Harvick’s engine turning sour and cars wrecking behind him—Logano was merely inches ahead Earnhardt.

That call ended the race, giving Logano his third straight victory in the Chase’s Contender Round, the first time since the elimination format was instituted last season that a driver has won all three races in a single round.

The victory was Logano’s sixth of the season, his first at Talladega and the 14th of his career.

“I had a good start, and then the 24 was pushing me and the plan worked perfectly but the inside lane started pulling back up,” Logano said of the final restart. “I saw the (caution) lights come on when I was still in the lead, and I thought we had it.

“It’s all about how the timing loops are and the camera makes sure that is what happened. It’s such a crazy race. There were such long green flag runs, you never see that. To pull it into victory lane here at Talladega is so cool.”

As formidable as Logano’s achievement was, it didn’t sit well with the heavily partisan Earnhardt crowd (Junior Nation HQ) in the Talladega grandstands. Catcalls, debris and thumbs-down gestures greeted Logano’s celebratory burnout after NASCAR declared him the winner.  Even though Logano won the race, Earnhardt, Jr. was the strongest horse in the race, coming from the back of the pack on two different ocassions to lead the race.

The green-white-checkered-flag restart came four laps after NASCAR extended a yellow-flag period when cars began wrecking in the tri-oval before the leaders crossed the start/finish line coming to green to start Lap 191.

Even though NASCAR had amended a rule before the race, limiting the number of attempts at a green-white-checkered to one (down from three) for the race at Talladega, the sanctioning body ruled the first try was not a bona fide attempt since the yellow waved before the first cars reached the stripe.

Earnhardt supported the amended rule before the race, and he continued to do so afterward, despite the outcome.

“Everybody is going to ask me a hundred times how I feel about the green-white-checkered rule now,” Earnhardt said. “I feel good about it. It was a good safe call. The race ended per the rules, and I’m totally OK with that.

“They decided officially who won the race, and Joey won it. He has had an awesome round. Unbelievable, really. We did everything we could today. Almost perfect, tried really hard.”

Earnhardt, who was in a “must win” situation, wasn’t the only casualty on Sunday. Matt Kenseth, in the same position as Earnhardt entering the race, was eliminated from the Chase after wrecking on the green-white-checkered attempt and finishing 26th.

Ryan Newman (12th on Saturday) and Denny Hamlin were the other two drivers taht failed to transfer, Hamlin after the escape hatch above his driver’s seat decided to act like a wing and flap during the race, requiring repeated repairs on pit road. Hamlin lost three laps in the process, got wrecked on the last restart and finished 37th to drop from second to 10th in the Chase standings.

Check out the unofficial results from Talladega.

So now you can stick a fork in Dale Jr, Denny Hamlin, Ryan Newman and Matt Kenseth, they are done!

The points are reset once again when the teams get to Martinsvile, and the Elite Eight go at it for the next three races culminating at Phoenix. Once the checkered flag falls at Phoenix there will be just four drivers running for all the marbles at Homestead.

Eight drivers, four races, one championship, who will be the last man standing?