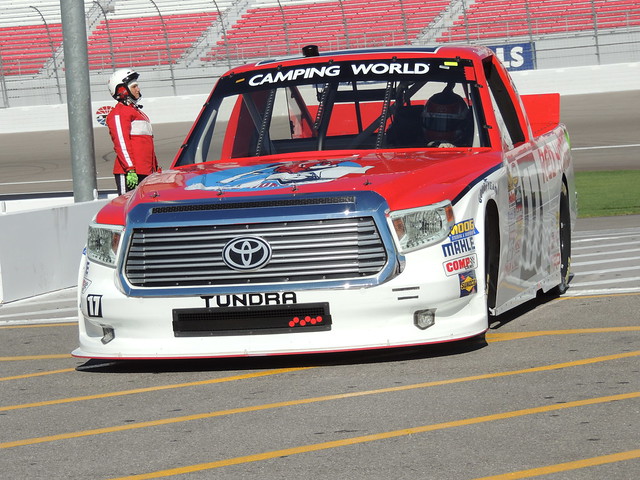 Restrictor plate racing at both Daytona and Talladega resembles scenes from The Gunfight At OK Corral!  The Camping World Truck Series race on Saturday afternoon was no exception.

Timothy Peters finished Saturday’s fred’s 250 NASCAR Camping World Truck Series race at Talladega Superspeedway exactly where he started—at the front of the pack—despite an extraordinary ebb and flow between the opening green flag and the checkers.

Peters was out front when NASCAR called the sixth caution of the race on the first lap of the only attempt at a green-white-checkered-flag finish, after contact between John Wes Townley and Spencer Gallagher sent both of their trucks crashing hard into the outside wall.

The victory was Peters’ first of the season, his second straight at Talladega and the ninth of his career.

Brandon Jones, who led the field to the last restart on Lap 97, finished second after Gallagher, his GMS Racing teammate, pushed Peters to the lead. Mason Mingus ran third, a career-best, and Erik Jones finished fourth and extended his series lead to 18 points over second place Tyler Reddick, who came home fifth on Saturday.

“I kind of thought that maybe he would take the outside,” Peters said, “but we’d already gotten the radio from the tower that this was going to be the one and only attempt (at the green-white-checkered). At that point, teammates are good for 95 laps.

Throughout the afternoon, storylines ebbed and flowed as quickly as the smoke from the Big One—the almost inevitable multicar wreck that finally occurred on Lap 92 of a scheduled 94 and affected both the finishing order and the series standings.

Brian Keselowski, making his first series start in a Ford owned by his brother, Brad Keselowski, threatened to win the race—until he ran out of fuel before the last restart.

“They (Keselowski’s team) said right from the get-go to save fuel, and I was,” said Keselowski, who finished 17th after leading 10 laps. But you can only do so much when you’re leading.

“You’ve got to go, so I didn’t save any when I was out front. I guess I should have, but that’s a little bit of inexperience in the Truck Series probably showing up. We’ll learn better next time.”

Two-time defending series champion Matt Crafton was shuffled to the rear of the field when debris struck to the grille of his Toyota Tundra, but that was the least of his troubles. Crafton was a victim of the Lap 92 10-truck wreck ignited by contact between the Tundras of Johnny Sauter and Matt Tifft.

Check out the unofficial results of the fred’s 250 at the Talladega Superspeedway.

With just four races left, the race for the championship is hotter than the Georgia asphalt!