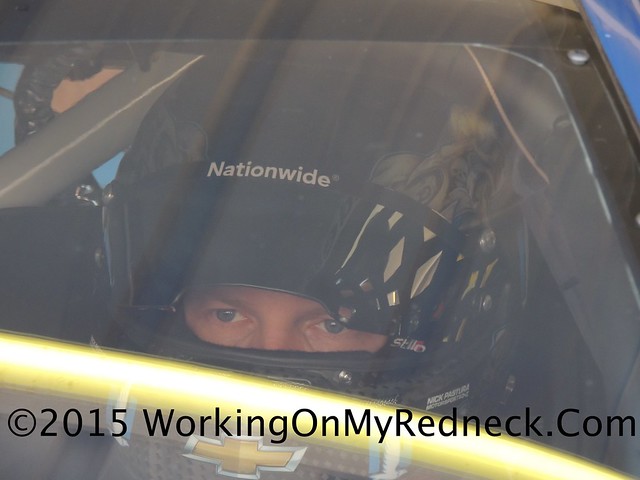 When Dale Earnhardt Jr. takes the green flag in the CampingWorld.com 500 on Sunday, Oct. 25, he’ll not only be looking to sweep into Victory Lane at the Talladega Superspeedway for the second time this season, he’ll also be trying to write his name into the track record book in a special way alongside his Dad – Dale Earnhardt Sr. – and Pete Hamilton.

With a win, Earnhardt Jr. would join the duo as the only drivers in NASCAR history to win three of the four races run at NASCAR’s “Super” superspeedways, Talladega and the Daytona International Speedway, in a single season. Earnhardt Jr. finished third in the season-opening Daytona 500, but won the GEICO 500 at Talladega in May after leading 67 of 188 laps and the Coke Zero 400 at Daytona in July to set up his shot at racing history.

He’d love nothing more than to join the elite company of his father (accomplished feat in 1990), who was driving for Richard Childress Racing, and Hamilton (1970), who  was driving for Petty Enterprises.

The CampingWorld.com 500 NASCAR Sprint Cup Series race on Sunday, Oct. 25 will be the deciding race in the Chase for the NASCAR Sprint Cup Contender Round in which the championship field will be cut from 12 to eight at the checkered flag. A victory at TSS by an eligible driver in the Chase will result in an automatic berth in the Eliminator Round.

Earnhardt Jr., who guaranteed his spot in the Chase with his triumph in the GEICO 500, attributes much of his success at NASCAR’s Most Competitive Track (Talladega) and Daytona to the fact that he feels a great responsibility to run well there because so many people expect him to.

“I feel like I’m supposed to get up there and lead,” Dale Jr. said. “I feel like it’s a real disappointment for a lot of people when we don’t finish well, and if we’re not up in the battle trying at the end. If we are not in that group crossing the finish line that is up front, I feel that disappointment from all the supporters of our team, more so here and at Daytona than other race tracks for sure.”

Hamilton and Earnhardt Sr. both came close to achieving NASCAR’s version of a Grand Slam only to have strange strokes of misfortune cause them to come up just short.

In 1970, Hamilton won the Daytona 500, swept the two races at Talladega and had a competitive car in the early going in the July 4th Firecracker 400 at Daytona before a strip of insulation broke loose and went down the carburetor, choking the life from the engine and putting him out of the race after only 46 laps. Twenty years later, Earnhardt Sr. appeared well on his way to winning his first Daytona 500 when he, while leading, ran over some debris and cut a tire going into Turn 3 on the last lap and Derrike Cope sailed by for the victory. Earnhardt Sr. went on to sweep the two Talladega races and the July race in Daytona in 1990 to come oh-so-close to perfection.

Earnhardt Jr. holds the mark for consecutive victories at NASCAR’s biggest, baddest track with wins in four straight races from 2001 to 2003, including a sweep of both races in 2002. He has six wins at the track in 31 career starts and has recorded 11 top-five finishes and 15 top-ten finishes. The six wins tie him with Jeff Gordon for second on Talladega’s all-time victory list behind only Earnhardt Sr. (10).

“I felt like we have a lot of supporters here because of dad’s success here,” Dale Jr. said after his GEICO 500 triumph in May. “Dad won so many races here. I think about all the races he won here and at Daytona. I love when we go to Victory Lane because I feel like I add to his legacy. All I ever want to do is make him proud. I feel like when we win at those tracks where he was successful, that’s exactly what we’re doing.”

The race at Talladega Superspeedway this weekend will be very interesting.  There are many storylines that will be playing out as the race unfolds.  Add to the fact that Talladega is the elimination race for this round, The Contender Round.  Notwithstanding that fact, Talladega always bring a feel of extremly high tension and a feeling that, as a driver, your fate is almost entirely out of your hands. Instead, cars and drivers have always had the misfortunes of being at the wrong place at the right time, and thereby getting caught up in someone else’s mistakes and ruining their afternoon and fortunes through a sheet metal crumpling crash!