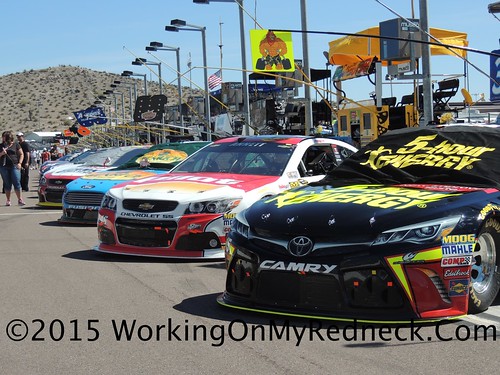 This week while the drivers and race teams are sweating out Talladega and the possibility of being eliminated from The Chase, the jockeying behind closed doors appears just as intense, as NASCAR and owners furiously try to hash out a plan to make the team business model a more stable one.

NASCAR and the owners might not spin each other out, but they have plenty of details to work through. As with a car, any small piece of the model could disrupt the whole package.

The initial NASCAR proposal, according to industry leaders who spoke on the condition of anonymity and confirmed by owners and team executives with knowledge of the negotiations, would give team owners of 36 cars guaranteed spots in a Sprint Cup field reduced from the current 43 cars to 40 cars.

Those 36 teams would be awarded charters, NASCAR’s word for what many would term a franchise, that could be sold if a team owner wanted to get out of the sport or cut down the number of full-time cars it fields.

Since June, race team executives and NASCAR have had discussions about putting a system in place for 2016, and NASCAR began explaining to owners its plans after a Sept. 29 meeting with them. The Race Team Alliance (RTA), a coalition of most (but not all) Cup owners, met a couple of weeks ago to discuss the proposal and negotiations have continued since then.

Michael Waltrip Racing co-owner Rob Kauffman, the chairman of the RTA, declined comment. Those involved said that the talks remain fluid and even the plan for number of charters and the size of the field could change.

Neither side really wants to negotiate in the media, and NASCAR tried to make a pre-emptive strike against those who might believe the scuttlebutt in the garage because it knows that the initial proposal could differ significantly from the final result.

“There is still a lot of work to be done and that will continue over the coming months,” NASCAR spokesman Brett Jewkes said in a statement after the Sept. 29 meeting. “We understand there will be speculation and rumors related to the concepts outlined today, but would caution against coming to any conclusions as we work toward final decisions. When it is appropriate to do so, NASCAR will make an official announcement.”

NASCAR has reason not to want media speculation. There are 43 cars that have attempted every race this year, but only 36 would get charters. Under the initial proposal, it appears that to be eligible for a charter, the current version of the plan requires a team to have been full-time since 2013.

That requirement would affect Stewart-Haas Racing and Joe Gibbs Racing, which each added a fourth car in the past two years. It also could hurt Penske Racing, which is trying to work with Wood Brothers to field a third full-time car in 2016 for Ryan Blaney.

There likely would be at least two charters for sale, the two controlled by Kauffman from MWR, which will close after this season. How much a charter is worth would depend on the bidders. As we all know in business, all one needs to drive up the cost is one more entity wanting to purchase a license than the number of licenses available!  That is business 101.

How many small teams would try to sell charters and then just attempt to win one of the open spots in the field? Or would the big teams assume they would be one of those to earn one of the four non-guaranteed spots each week?  That is just a couple of the questions that are left unanswered presently.

But it goes deeper than that. Not only would a charter come with a guaranteed starting spot, it could come with a guarantee of television money. NASCAR teams get 25 percent of the television money, which currently is distributed as a portion of the purse and depends on finishing position. The amount teams as a whole get from the television deal won’t change, but whether a team with a charter earns a certain amount of guaranteed money throughout the season, regardless of finishing position, remains one of the potential issues.

The idea of the television wealth spread evenly likely would help smaller teams but be a potential hit to the wallet for successful big teams.

So, as you can see, there is a great deal for NASCAR and teams to negotiate. They would like to have it done for 2016, with most hopeful it will happen but still some skepticism that it can get done. If an owner or two don’t agree and won’t sign the final offer, how will NASCAR distribute the charters? Or are fewer charters distributed? And all it takes is one owner angry enough and willing to find a lawyer to stifle the whole process.  And that spells trouble in River City!

Progress isn’t always easy. Additionally, the details will frustrate. While a team with a charter would be required to compete in each race to keep the charter, would there be a performance clause requiring a team to have a certain level of performance, too? Is there still a team cap of four cars, or could NASCAR make it three and grandfather in those already with four for a certain number of years?  Very interesting question to be answered!

It all remains to be seen, and the final product could look quite different than the one initially proposed. It appears a step in the right direction of giving team owners cash flow they know they will receive regardless of performance, as well as the ability to sell something beyond highly depreciated equipment when they want to get out of the NASCAR team-ownership business.

It won’t fix all the problems. And it likely will create some new ones. It’s about finding a business model that makes more sense. The challenge now is finding something that makes sense for a dozen or so owners who know not everything will work in their immediate favor but might benefit their financial health, as well as the sport’s financial health, in the long run. (ESPN)

TIL NET TIME, I AM STLL WORKING ON MY REDNECK!