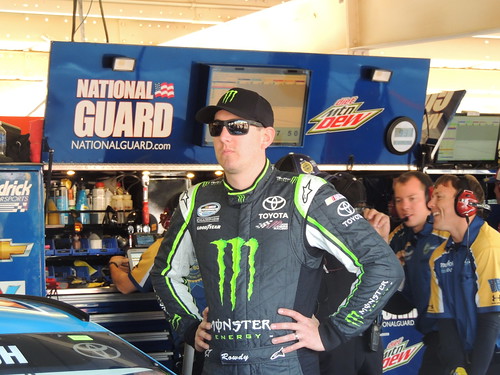 Not just this season, but for most of his NASCAR career, Kyle Busch has been accustomed to overcoming obstacles.

In Saturday’s Kansas Lottery 300 at Kansas Speedway, Busch brushed aside a litany of mistakes that included a pit road speeding penalty, a hole in the nose of his No. 54 Toyota, a pit stop that dropped him to seventh for the penultimate restart, an unwelcome green-white-checkered-flag restart and a teammate who had the fastest car for much of the afternoon.

The end result was Busch’s 75th XFINITY Series victory, extending his own record. Busch won for the third time at Kansas and for the fifth time in 20 starts this season.

The race also saw Chris Buescher add one point to his series lead over Chase Elliott. Though both drivers had issues — Elliott a wreck during qualifying that sent him to a backup car and the back of the field; and Buescher a pit road speeding penalty — Buescher won a drag race to the stripe to come home sixth to Elliott’s seventh and leads the standings by 27 points over the defending champion.

But the final 43 laps of the event were vintage Kyle Busch. Restarting seventh on Lap 157, after the seventh caution of the afternoon, Busch surged into second place in a single lap. For the next 28 laps he harrassed teammate and eventual runner-up Matt Kenseth before clearing his Joe Gibbs Racing teammate through Turn 4 on Lap 185.

KyBu survived a green-white-checkered after Joey Gase’s engine blew and oiled the 1.5-mile track with five laps left. Picking the outside lane, Busch cleared Kenseth entering the first turn and pulled away to win by .607 seconds.

“I wasn’t sure we had enough for that 20 car (Kenseth) today, but there at the end of the race, the track was cooling down and certainly getting freer and it looked like Kenseth just was too loose,” Busch said. “And I was able to really get the gas down and drive real hard and had a good car to stick through the corner.

“This Monster Energy Camry was awesome, (crew chief) Chris Gayle and the guys did a fantastic job for me in getting me a really good piece there at the end to be able to battle with Matt, and it’s cool to end up in Victory Lane any day… I wasn’t sure how I was going to get the pass done, but fortunately, finally there I was able to do it.”

“It’s frustrating to get beat again,” said Kenseth, who has finished second in each of his last four XFINITY Series starts. “We were out front in Chicago and had the better car, but second is the (next) best place to finish, I guess.

“Kind of aggravating when you get beat, but we were too free at the end. I didn’t give Wheels (crew chief Mike Wheeler) good enough information on the tires. I did everything I could to hold off Kyle except for wrecking. Just couldn’t do it.”

The XFINITY Series now has off a couple of weeks to regroup and make a dash to the finish at Homestead.