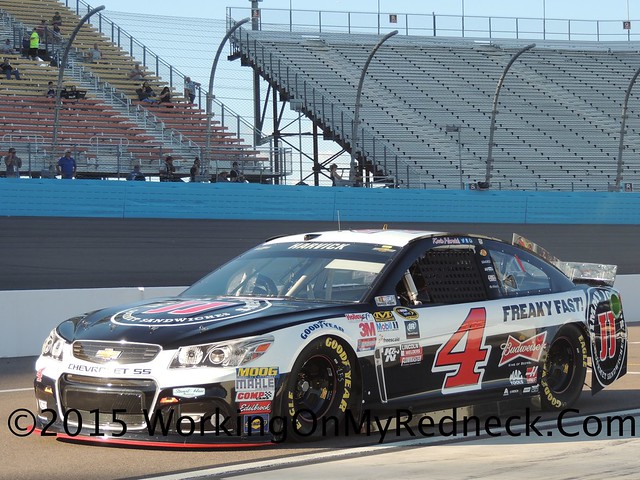 Kevin Harvick thoroughly dominated, and completely embarrassed, the field with his victory in the AAA 400 at Dover International Speedway!

Then his victory celebration made some of his competitors wonder if the reigning Sprint Cup champion had something to hide.

Many in the garage believe Harvick backed his car into the wall during his celebratory burnout perhaps in an intentional attempt to create damage to his race car that would limit NASCAR’s ability to do a proper post-race inspection.  Could this be that the other seven Chase competitors are letting Harvick rent space in their collective heads?

Harvick on Tuesday denied any knowledge of hitting the wall.

“I don’t actually remember hitting the wall,” he said. “I remember the tires blowing out, but I don’t know if I actually hit the wall. These things are hard to win and I enjoy celebrating, and I’m going to burn the tires off for sure.”

Brad Keselowski said Tuesday it was absolutely common for drivers to intentionally damage their cars after a race. Denny Hamlin called on NASCAR to figure out a way to keep cars intact for the technical inspection that occurs after a car is returned to North Carolina for a thorough review at the research and development center.

“You don’t want to discredit anyone’s win because what he did was really, really impressive,” Hamlin said. “But all the other competitors, whoever doesn’t win each week wants to make sure they’re on a level playing field with whoever did win. Going forward, I would like to see some kind of way of insuring our cars all stay intact for the R&D Center. Because right now, the R&D Center is kind of a moot point if guys tear up their cars.”

Harvick led an unbelievable 581 laps in the first three Chase races, but he crashed in the opener at Chicago and ran out of gas while headed to the win at New Hampshire. It backed him into a must-win situation at Dover, a track where he had never before won a Cup race.

Harvick completely dominated the race Sunday, being in a zip code all by himself, and easily grabbed the win he needed to advance into the second round of the Chase.

Conversely, Kyle Busch kinda sorta declined to speculate on Harvick’s intent during his victory celebration.   KyBu went on to say, with an exaggerated eye roll, “Sometimes when you’re in a burnout and you’re in the smoke, you can’t see where you’re at.”

But Keselowski said intentionally damaging the car is common and he has done it himself. NASCAR inspects several cars at the race track following a race, while three or so are brought back to North Carolina for a more detailed inspection.

“The cars aren’t tech’d the same way at the track as they can be tech’d at the R&D Center,” Keselowski said. “It’s been going on for a long time. But I’m not making any accusations. I’ve definitely blown tires out. I think every driver has done things to do some kind of damage to their car.”

These accusations, from a few of the Chase drivers, come at a very interesting and critical time in the NASCAR season.  It is quite interesting that Keselowski has admitted to damaging a race car after a victory to preclude NASCAR R&D from detecting any possible rules infractions in the design of his race car! Additionally, we all remember the comment that came out of Chad Knaus’s mouth when leaning in and talking to Jimmie Johnson prior to the race a few years ago.   Knaus was instructing Johnson to damage the car if he wins the race!

So all this commotion begs the question: If the rule book does not specifically prohibit something, then does that mean that it is legal to do it? Additionally, if you can sharp-shoot and cherry-pick the rule book is that finding the competitve edge, rule making, or cheating?

You be the judge!

Either way you look at it, Kevin Harvick and his race team, have officially began to rent space in the remaining seven race teams heads, all this at a very crucial time!

Let the physchological warfare, the head games, and the smack talking begin!

Twelve drivers, seven races, and one championship, who will be the last man standing?