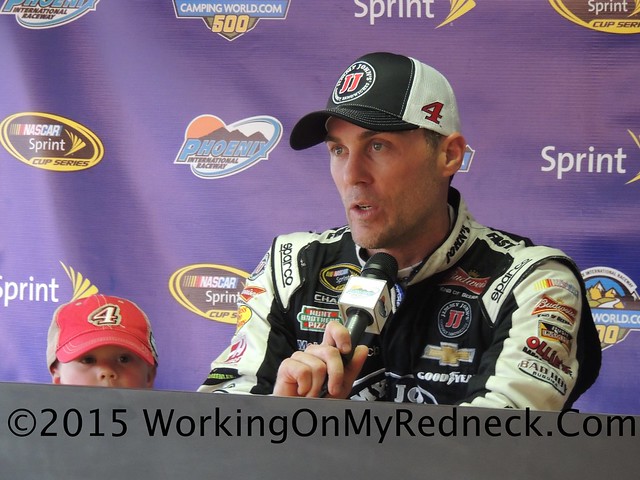 Forced to win at Dover International Speedway to keep his NASCAR Sprint Cup Series championship hopes alive Sunday, Kevin Harvick did just that! Harvick gave a driving clinc and was totally dominating in Sunday’s AAA 400 to stave off elimination from the Chase for the NASCAR Sprint Cup.

In a virtual carbon copy of last year’s Chase race at Phoenix, where the 2014 premier series champion had to win to advance to the Championship Round at Homestead-Miami Speedway, Harvick led 355 of 400 laps (a career best at any track) in winning for the third time this year and the 31st time in his career.

“I think we’re better than we were last year, just because of the experiences and things that we’ve had,” Harvick said after the race. “I think when we look at everything that’s gone on over the last couple of years, it’s just been a lot of fun.

“So, it’s just that never-quit attitude. That’s what (team co-owner) Tony Stewart said when we went to Homestead last year. He said, ‘Whatever you do, do not quit until they throw that checkered flag.’”

Harvick won the race and secured his first Sprint Cup title by a half-second over Ryan Newman.

But there was one major difference between last year’s must-win race and the one on Sunday. Phoenix is Harvick’s best track. At Dover, on the other hand, he had never won before and had posted just four top-five finishes in 29 previous starts.

As fast as Harvick’s No. 4 Stewart-Haas Racing Chevrolet was, however, none of the statistics mattered. After a restart with 24 laps left, he pulled away to a 2.639-second victory over Kyle Busch, who likewise secured a berth in the 12-driver Contender Round with his second-place run.

Nor did the stats help Jimmie Johnson, whose shocking ouster from the playoffs took place at the Monster Mile where he holds a record 10 victories. The six-time series champion took his No. 48 Chevrolet to the garage on Lap 106 after a rear axle seal failed.

Johnson lost 36 laps while his team replaced the rear end housing and was credited with a 41st-place finish, leaving him 12 points shy of the Chase cutoff, which came down to a tiebreaker for the 12th and final spot between third-place finisher Dale Earnhardt Jr. and fourth-place Jamie McMurray.

Joining Johnson and McMurray on the Chase sidelines were Paul Menard (25th Sunday) and Clint Bowyer, who like Harvick faced a win-or-bust scenario at the one-mile concrete track.

But on Sunday, Harvick showed his hand as the speed horse in the Chase, just as he was last year. Harvick’s car was fast last week at New Hampshire, but he ran out of fuel while leading with three laps left to create the must-win scenario at Dover.

“Anytime you can go through moments like this and gain some momentum and prove to yourself that you can do things like this, there’s no way you can’t be stronger,” Harvick said. “I’m just so proud of those guys and so proud of our fans and everybody for all their support all week. There it is—stay the course.”

Kyle Busch conceded Harvick’s victory was bad news for everyone else still in the Chase.

“The way he ran today—hell, yeah,” Busch said. “That was a guy that we wanted to knock out. That’s a guy that can win all these races, and you don’t want to have to compete against a guy like that.

“But that’s why they’re as good as they are, and they were last year’s champion, so they’re going to have an opportunity to continue on. We’ll see what happens. There’s still two more rounds to figure out who’s going to make it to Homestead.

Next week is a “home game” for all of the Sprint Cup teams.  It will be the final race at the Charlotte Motor Speedway for 2015.

Check out the unofficial results from the AAA 400.