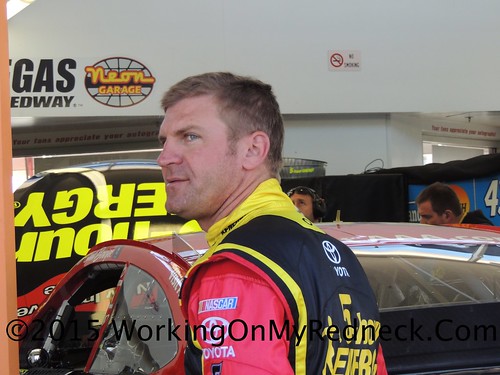 In spite of all the rain washing out Friday’s track actitivty at The Monster Mile, better known as Dover International Speedway, there was still something news worthy happening at the media center Friday.  Harry Scott, Jr., Clint Bowyer, and the representive from 5-hour Energy  gathered in Dover’s media center to officially announce, what everyone already knew, that Bowyer will be driving for HScott Motorsports in 2016.

The single-season move will keep Bowyer, 36, in the Chevrolet family while three-time premier series champion, Tony Stewart, wraps up his final season as driver of the No. 14 entry.

Friday’s announcement closed the books on what has been a tumultuous season for the Emporia, Kansas, native. A little more than a year after announcing a multi-year contract extension with its driver, Michael Waltrip Racing announced in mid-August that Bowyer and the organization had “mutually agreed to separate” at the conclusion of the 2015 season as the team closes its doors.

This announcement is most definitely a win-win situation for both Bowyer and HScott Motorsports.  For HSM, Bowyer brings to the table a veteran driver who knows how to win races.   Bowyer also will elevate the program, give it some more experience in the driver’s seat to compliment Steve Addington as the crew chief, and most importantly Bowyer’s presence in the company will give it a winning credibility!

One small point to be made after listening to the press conference from Dover.  Harry Scott, Jr. did not identify which of his two current cars that Clint Bowyer would drive in 2016.  Additionally, Scott did not deny, nor confirm, that HSM could be a three car team in 2016!