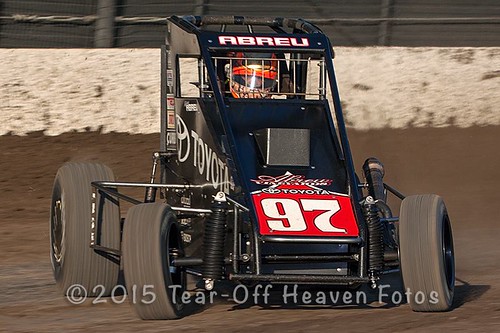 Calistoga Speedway, in the heart of Califonia’s wine country, is often referred to as the house that Louie built, in honor of Louie Vermeil’s decades of dedication to sprint car racing on the Napa Valley half-mile oval.  (For those that may not recognize Louie Vermeil’s name, you might recognize his son, Super Bowl winning coach Dick Vermeil.)

Louie Vermeil may have built the house, but on the weekend (Labor Day Weekend) that honors his memory, Rico Abreu owned the joint!

The driver from Rutherford, CA, claimed both the sprint car and midget races during Sunday’s finale of the Louie Vermeil Classic, capping a dominant weekend that saw him on the victory stage almost more often than the trophy presenter.

Rico’s box score for the weekend included winning Saturday’s midget race and finishing in the runner-up spot in the sprint car feature, and only after setting the quickest qualifying time for both, including a new track record for midgets, the first to break the 19-second mark.

“There’s only one weekend all year that we get to come out and run the non-wing cars and they are so much fun to drive,” said Abreu. “It’s pretty cool to be so competitive right out of the box.”

In Sunday’s midget race, Abreu ran the top of the race track, high wide and handsome, while most of the field ran the bottom groove. The move got him up to the second spot before he took the lead on lap eight by diving under Oklahoma’s Trey Marcham.  The pair swapped the lead in a wheel to wheel duel before Abreu took control of the race for good a few laps later.

As Marcham and two-time USAC West Coast midget champion Ronnie Gardner battled for the runner-up spot, Abreu rocketed to as much as a full straightaway lead while cautiously slipping past slower lapped cars to take the checkered flag.

“I had to make my own lane,” said Abreu about his move to the top in the opening laps.  “You can’t pass these guys by just following them.”

Abreu used the same strategy in the sprint car feature race, way up high not afraid to die. Rico only needed six laps to move up to the second spot from a starting spot of eighth, it was like a warm knife through butter!  Two laps later, he dove down to the bottom under Southern California driver Jake Swanson for the lead, and never looked back.  If Abreu had looked over his shoulder, he would have seen that the rest of the field was so far behind him that they were almost in another time zone when he drove under the checkered flag for his second win of the night.

For those who may not too familiar with this young man, I would strongly suggest that you do your homework to familiarize yourself with Rico Abreau.  I assure you that you will see him soon racing in one to the three touring NASCAR Series!