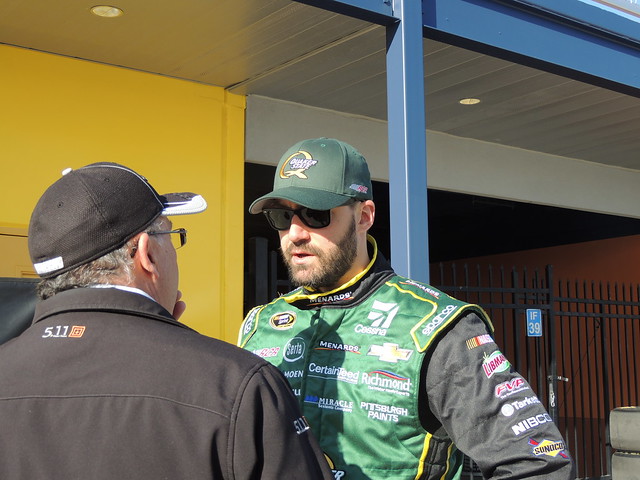 The decision to compete in Saturday afternoon’s XFINITY Series sixth annual Road America 180 Fired Up by Johnsonville at Road America (Wisconsin) paid off in a huge way for Paul Menard, who scored his third career XFINITY victory at his hometown track.

Menard, a native of Eau Claire, Wisconsin, started eighth and saw a decision to stay out after pitting on Lap 24 work to his advantage, as he edged out a relentless Ryan Blaney by 0.573 seconds at the 14-turn road course. After the contest, Menard said that if the race had extended a lap farther, he would not have had the fuel to finish the race.

“I’ve been really fortunate to win at some of the coolest tracks, Indianapolis, Milwaukee, Road America is right there,” Menard said. “These guys called a great race. We didn’t have the fastest car. We had a really good short run car. We really burned off the rear tires as we ran, but the Richmond Water Heaters/Menards Chevrolet was fast and (crew chief Danny) Stockman made a hell of a call at the end.”

If wondering about running out of fuel wasn’t enough to clutter his mind, Menard also had to fend off a verfy dedtermined and hard-charging Blaney.

“I was definitely concerned,” added Menard on both circumstances. “I was saving as much as I could under caution, but then when we fired off I was just chattering the left rear tire really bad. It took a couple of laps for it to come in, then the (No.) 22 started burning his stuff up, but it just didn’t fire off very good in the end, but it came to us.”

Summertime thunderstorms, and a light ran, cancelled the qualifying session, so the starting order for the Saturday race was set from the practice speeds on session number one on Friday.

Leading 23 of the 45 scheduled laps, Chase Elliott was the dominating race car, but a win was not in the cards at Road America. However, Elliott’s performance on the road course has kept him within 16 points of Xfinity Seires points leader Chris Buescher.

Next week they roll into the track too tough to tame, Darlington.  With many teams sporting retro looking paint schemes celebrating that the race has moved back to the traditional Labor Day weekend slot on the NASCAR schedule, there will be some really cool looking hot rods in the pits!

Check out the unofficial results of the Road America 180 Fired Up byJohnsonville.