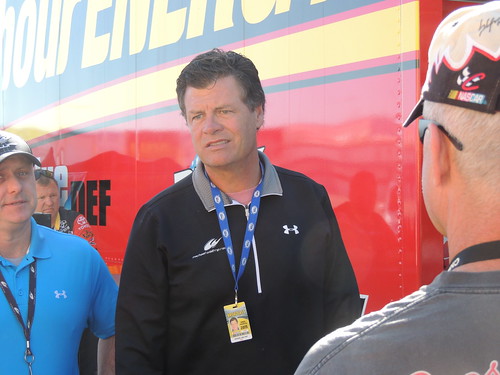 Every since the blockbuster news that leaked out that the big money man of Michael Waltrip Racing, Rob Kaufman, announced that he was buying an equity stake in Chip Ganassi Racing, there has been many more questions than answers.  There are two things that are still unclear, first is what will the employees of MWR do at the endo of 2015, and secondly what will the future of Chip Ganassi Racing look like in 2016?

The day of the announcement, FOXSports.com learned that MWR’s race shop in Cornelius, North Carolina, was up for sale, which was a strong indicator the team wasn’t going to be back in the NASCAR Sprint Cup Series in 2016, at least not at the anticipated level.

Still another sign was that MWR had cancelled its annual fall sponsor summit, where the team officials meet with the representatives of the companies that pay for the squad to race. The cancellation of that event was another huge indicator that next year was in strongly doubt.

But until Wednesday, everything we were hearing fell in the category of rumors.  But those rumors are starting to take on some reality.

Wednesday it became official, with MWR announcing that it wouldn’t field any full-time cars in the NASCAR Sprint Cup Series next year. So what does it all mean?  Let’s take a look.

Rob Kauffman — The MWR co-owner apparently will focus his energy on his new partnership with Ganassi for 2016 and beyond. Felix Sabates has already said Ganassi is likely to expand from two cars to three next year, with Kauffman coming on board.

Michael Waltrip — So far, Waltrip has not announced his plans for 2016, other than he will maintain his TV presence on FOX Sports1 as a TV commentator.

Clint Bowyer — One of the sport’s top-tier drivers, Bowyer is in an enviable position. He controls the 5-Hour Energy sponsorship and has that as his bargaining chip for his future. Another option might be the long-rumored second car at Furniture Row Racing.

David Ragan — No change in status for Ragan, who has said publicly on several occasions that he doesn’t have a signed deal for 2016 and is a free agent at the moment.

Brian Vickers — Sidelined by complications from blood clots on multiple occasions, it’s unclear what the future holds for Vickers. although given his history of health issues, he would be a tough sell for a sponsor.

Toyota — David Wilson, the president and general manager of TRD, U.S.A., Toyota’s racing arm here, has said he’s looking for another front-line team and that he thought Furniture Row Racing would be a good fit for Toyota. Obviously, with MWR not running a full-time team next year, the need to find another good team takes on an added sense of urgency for Toyota management.

MWR employees — Certainly, this isn’t good news for the men and women at MWR. Although the team has not said anything about the fate of its employees, it’s clear that if the team goes from two full-time cars to zero full-time cars, they won’t need to be staffed at anywhere near the level they’re at now. The good news is if Ganassi does indeed add a third car, presumably some of the MWR employees will find their way over there.

Sponsors — Over the years, MWR has been fortunate to have a number of strong sponsorship partners. With the need for funding always critical for NASCAR teams, MWR’s current sponsors like Aaron’s will have no problem finding places so spend their money in NASCAR.

Even after this morning’s press conferences with Clint Bowyer, and later with Rob Kaufman, there are still many more questions than answers regarding this whole situation. It is most assuredly the first of several dominos that are about to fall involving drivers, sponsors, and race teams.  But one thing that came out of the press conference was that it appears that, despite some of the garage rumors, Clint Bowyer will not be moving over to Chip Ganassi Racing with Rob Kaufman.

It would also appear that Clint Bowyer very well may end up at a race team in 2016, like Furniture Row Racing, for a brief one year pit stop before moving on to a potential powerhouse race team.

That powerhouse race team could be the Stewart Haas Racing No. 14 Chevy in 2017!  Yes that is not a typo. Bowyer could be the heir-apparent to replace Tony Stewart as the driver of the No. 14 Chevy!  After all, the last two years have not been very productive for Stewart, largely because of his severely injurd right leg. Additionally, the wrongful death lawsuit litigation that Stewart will have to deal with over the next few years may force Smoke to bail out of the driver’s seat and work with Haas more on the management side of the team.