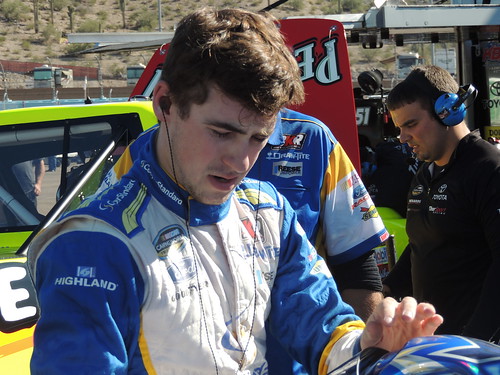 Over the last five or six weeks there have now been four races that Ryan Blaney has had a shot at winning, both in XFINITY and Camping World Truck races, and victory slipped theough his hands. Nevertheless, those races were the epitome of “the thrill of victory and the agony of defeat”, and tonight in Bristol was no exception.

Despite the fact that Blaney was penalized by NASCAR for an apparent jump on a restart on lap early in the race, and fell a lap down to the leaders, Ryan and his fast BKR Cooper Standard No. 29 Ford was able to work their way through the field into a position to win with the green-white-checkered finish. Tonight Blaney won the UNOH 200 presented by ZLOOP in a green-white-checkered finish on Wednesday night at Bristol Motor Speedway. For Blaney, it was his first win in the NASCAR Camping World Truck Series at the Tennessee short track and his fourth win in the series.

Two-time defending series champion Matt Crafton had the lead when a late caution came out for an accident involving Ty Dillon and Ben Kennedy. But Crafton got overtaken on the restart, because he either spun his tires of the engine faltered on accleration, and finished seventh.

All day the inclement weather plagued Thunder Valley.  It rained off and on all day, but it did not affect qualifying earlier in the afternoon.  However, there was a red flag that lasted 45 minutes due to a passing rain shower, and it played a very important part in the outcome of the race.  The race was finally restarted with just 28 laps to go.  Those last 28 laps of racing was a barn-burner!

Check out the unofficial results after the UNOH 200 presented by ZLOOP.