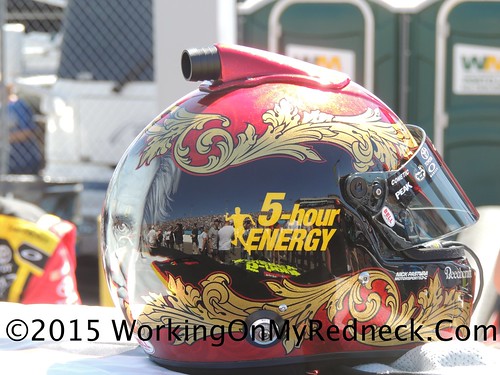 With the announcement of Rob Kaufman buying an equity stake in Chip Ganassi Racing a few weeks ago, the impending demise of Michael Waltrip Racing was not entirely unexpected.  But the news out of Bristol on Wednesday that MWR would not be fielding a Sprint Cup team in 2016 fueled the rumor mill in the garage.

But what was surprising is how the news impacted Clint Bowyer.  MWR’s star driver was released from his contract one year early, which immediately makes him a free agent for next year and beyond.

That the two entities – MWR and Bowyer – were linked by Wednesday’s announcement is sadly fitting. The Richmond race-fixing scandal they were both part of in 2013 sent the organization on a downward slide from which it could never fully recover.

One of them still has a bright future and that’s Bowyer. He can take loyal sponsor 5-Hour Energy to whatever team he wants and hopefully salvage something out of his once-promising career. He scored a career-best three wins and 23 top-10s in 2012, his first season with MWR and Toyota, but is winless since.

In a statement released Wednesday, 5-Hour Energy director of communications Melissa Skabich said: “5 Hour ENERGY has enjoyed a great relationship with Michael Waltrip Racing and Clint Bowyer since joining forces in 2012.  MWR and Clint have delivered above and beyond with our partnership and we thank them for their dedication.  Clint is a great ambassador for our products, customers and retailers.  The MWR team and Clint will continue to remain focused on getting 5-hour ENERGY in the Chase.  We will make no further comment until we are ready to announce our future plans.”

There are no positives for MWR or its employees, who officially learned Wednesday they’ll be looking for new jobs after this season. That’s with the exception of team founder Michael Waltrip, who still has his TV career with Fox Sports to fall back on.

But the biggest question is Bowyer, 36, who controls his future today as much as he did when he left Richard Childress Racing to join MWR. With no apparent openings at major teams for next season, Bowyer might need a placeholder ride for a year – much like Kasey Kahne when he drove for Red Bull Racing before joining Hendrick’s four-car juggernaut.

After that, Bowyer would have more options. The garage has been buzzing for a few months about the possibility of Bowyer joining Stewart-Haas Racing, but to replace who?

Reigning Sprint Cup champion Kevin Harvick is locked in. Danica Patrick just signed a multi-year contract extension. And co-owner Tony Stewart said Tuesday that Kurt Busch’s extension will be done “soon.”  That could leave Stewart, who is struggling to be competitive and has his best years behind him at 44. Could Bowyer drive the No. 14 Chevy at SHR in 2017?  I am just saying!

In the meantime, it doesn’t sound like hooking up with Ganassi for one year is an option for Bowyer if Kauffman buys into the team, as the owner stated he planned to. Kauffman said he and Bowyer “agreed we would go our separate ways at the end of the season and I wish him well in whatever direction he pursues.”

If the rumor mill is right, Bowyer is headed to HScott Motorsports. Richard Petty Motorsports made Bowyer an offer several years ago and is interested in him again. But this is why HSM makes sense: Despite Harry Scott Jr. playing coy at Watkins Glen — following a salmon fishing trip with Bowyer in British Columbia — multiple sources say HScott Motorports could offer the Emporia, Kansas, racer a ride until a premiere seat opens up.

A year with HScott Motorsports would provide Bowyer the opportunity to get up to speed with Hendrick-powered equipment before transitioning to Stewart-Haas Racing. Prior to signing his final contract with Richard Childress Racing, Bowyer was on a very short list to drive the No. 5 Chevy at Hendrick in 2008.

Bowyer is scheduled to meet with the media on Friday morning. Perhaps by then we’ll know the rest of the story — or at least part of it! Until Bowyer declares where he will be for 2016, the rumor mill will be running at Mach2!