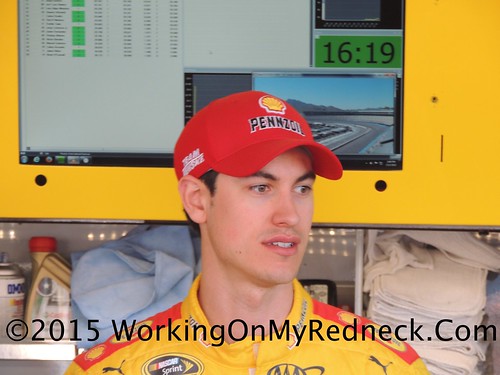 Last week he ran out of gas with three laps reamining in the race at Pocono.  This week Joey Logano competed an unprecedented sweep at the high speed beautiful Watkins Glen International located in the Finger Lakes region of upstate New York.

Pressuring race leader Kevin Harvick over a 30-lap green-flag run to the finish of Sunday’s Cheez-It 355 at the Glen, Logano made the winning pass through the final two corners at the 2.45-mile road course as Harvick ran out of fuel in Turn 6.

Picking up his second victory of the season and the 10th of his career, Logano crossed the finish line 5.273 seconds ahead of Kyle Busch, who grabbed second place as Harvick coasted over the stripe to secure third.

“I’m still just trying to catch my breath,” Logano said after climbing from his No. 22 Team Penske Ford. “I was really excited after that one. I was running down Harvick there for a little bit, and once I got close to him, he started to pick up his pace a little bit, which was good, because I needed him to run out of gas.

“I started to catch him a little bit, and I drove into (Turn) 1 too hard (on the final lap) and started to wheel hop. I just about lost it, and at that point you just hope he runs out of gas, which he did in the last corner. It makes up for last week. We lost the race last week the same way, so it makes up for it to get it this week.”

This week Logano was not a dominating force during the race, as he has been on severaal occasions, he just led the last 1,000 yards.

With Logano’s victory, every driver who has won a race this season — with the exception of Kyle Busch — has clinched a berth in the Chase for the NASCAR Sprint Cup, assuming each starts the remaining races of the regular season. Busch cracked the top 30 in the standings for the first time after returning from an 11-race injury absence.