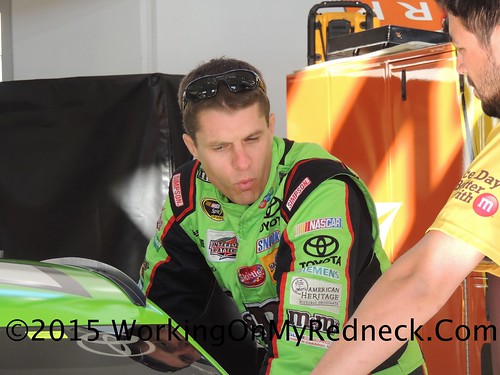 For most of the last couple of weeks there has turmoil inside of  Michael Waltrip Racing as news emerged that the big money man fronting MWR, Rob Kaufman, has bought an equity stake in Chip Ganassi Racing.  There are more unknowns than anything surrounding the deal, one that continues to unfold behind the scenes between team owners, sponsors and manufacturers. Yet for the team’s drivers, crew members and employees, the saga surrounding the future of MWR hits very close to home.

David Ragan, driving for his third race team this year and now the driver of the #55 Aaron’s Toyota for MWR, called the news of Kauffman’s buy-in at Ganassi a small distraction for the team during last weekend’s event at Pocono Raceway. This is not the first time Ragan has gone through the rigors of ‘Silly Season’ and he says it is something you get accustomed to in NASCAR.

With Felix Sabates saying in a statement in which he called their organization “a three-car team”, there is speculation at least one of the MWR cars could move over to Ganassi. If that is the case, Ragan believes it will be difficult for MWR to continue in a competitive form as a single-car organization. “I don’t think any team can survive as a single-car operation today,” he said. “You can’t consider Furniture Row a single-car operation. That just isn’t real. Wood Brothers Racing isn’t a single-car operation. Any single-car team they have some affiliation. You can certainly be a single-car team and hang in there in this sport and just maintain mediocrity. If you’re going to be a winner or going to be a Chase contending team you’re going to have to have some affiliating with a larger team, you’ve got to have some manufacturer support and you’ve got to have an owner that’s going to bankroll $20 to $30 million a year in order to go race. … Whatever goes forward with Rob and Michael, we’ll have to be associated with a larger team.”

With so many unknowns facing MWR, Ragan understands that when it comes down to it, he has to do what is best for his career and future in the sport. “One thing I learned a long time ago is that it’s never too early to talk about other opportunities in the garage,” he said. “I think there are some guys that show up for the Daytona 500 one year that are already trying to figure out what they’re going to do for the next. In a sport where we don’t have any long-term guaranteed contracts and any unions that guarantee where you’re going to be at five years down the road, you’re always looking at options moving forward.”

However, for the time being Ragan feels at home at MWR and believes the team is making strides and beginning to improve their overall performance. “I like the guys at MWR,” he said. “I’ve enjoyed working with Aaron’s and I think Brian Pattie is one of the smartest crew chiefs that I’ve worked with. We’ve gotten our race cars better over the last couple of months. We’ve still got a long way to go, but I’d love to be back with these guys next year in whatever capacity or whatever race shop these cars are raced out of, but that’s not all my decision. I just try to fit in as best I can and do the best job that I can and hopefully they keep me in the loop — whether it’s good or bad information.”

If Felix Sabates was correct when he slipped up and mentioned that Chip Ganassi Racing would become a three car team, then that would appear that the remaining No. 55 Michael Waltrip Racing is in a very precarious position next year.  As Ragan alluded above, a single car team without an affiliation with a bigger organization, like JGR, HMS, RCR, or RFR, is destined to flounder and fail.  That makes this impending “merger” of some of MWR assests into Chip Ganassi Racing a major concern for Ragan and all of the No. 55 team. Their future is definitely called into question for 2016!

Does the game of musical chairs ring a bell?  It really looks like some of the current MWR employees may be looking for a new place to hang their tools after the 2015 season concludes at Homestead in November.