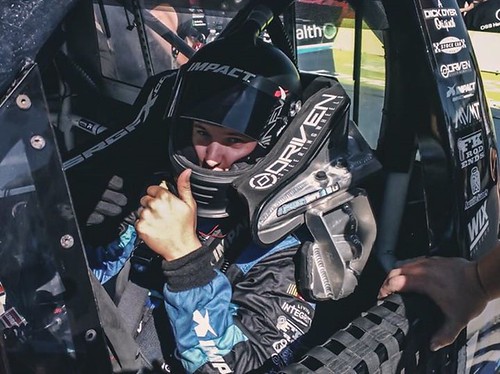 Working On My Redneck, with the help of Shane Smith, has embarked this season on mission to try to introduce the readers to some of the lesser publicized up-and-coming race car drivers in NASCAR.  It is the opinion of WOMR that NASCAR does not necessarily do a great job of shining a light upon, and giving press to, some of the under-financed drivers and teams struggling to make their way in a profession that demands big sponsorship dollars.

WOMR:  At what age did you first want to become a race car driver?

Jordan Anderson:  I have had a passion for racing for as long as I can remember.  I think the desire to pursue racing started when I was about 5 or 6, when I told my parents what I wanted to do.  Coming from a family with no racing background, and in a town where there wasn’t really any racing presence, was a shock for them I am sure.

WOMR:  When did you actually first get to race, and what type of equipment was it?

JA:  When I was 7 years old I heard about a WKA (World Karting Association) national race taking place about 30 minutes from where I grew up.  My family and I went to the track as spectators for the first time.  The previous year my family had gone to the Cup race at Darlington as spetators, so I had already become a big fan.  At the WKA race we sat next to Nick Hutchins and his family, who was a few years older than me at the time.  I did not know that Nick had been racing Go Karts for years, and had been sidelined because of an injury that he had received the week before.  Nick and his dad invited me to come out to a race track named Palmetto Supertrack, just outside Columbia, SC, they were testing one of his Go Karts.  After cutting a couple of laps, I was hooked, and the rest was history!  A few months later, when I turned 8, I ran my first race at the same track with the help of the Hutchins family.  It was in a weekly WKA race in the Briggs Junior Sportsman I class.

WOMR:  How involved were your parents in your racing?

JA:  My parents have always been supportive in my racing from the beginning.  For a mom and a dad to help their kid pursue something like racing takes great faith, and I see that now.  The time, resources, labor, and sweat that they sacrificed to help me work towards achieving a dream is something that I can never thank them enough for doing.  At 12 years old my dad challenged me to do something that has shaped who I am today.  After trying to figure out how to fund a racing program and move up the ranks, he told me to try to find some sponsors for our program that could keep the wheels rolling, because they couldn’t keep supporting things.  Just a week later I walked into Dick Dyer Mercedes/Volvo and asked for a meeting with the owner, Dick Dyer.  I had that meeting with him the next day, and I went in with as much preparation as a 12 year old could have done.  That meeting went well.  The Dyer family is still a sponsor of mine to this day, and are great friends of ours as well.

WOMR:  Do you have any interests outside of racing?

JA:  When I say that racing is my life, it really is.  Every extra minute I have during a day is spent trying to figure how to further my racing program and build on what I have.  I spend a lot of time reading blogs and books, trying to learn more about various subjects and topics that relate to marketing and brand building in the pursuit of sponsorship.  I do all the graphic design work for my program and I really enjoy that.  I am a big music guy and I enjoy EDM (electronic dance music) music.  I have actually been teaching myself how to DJ/produce music, when I have time to do that on the road.  On a day off though, nothing beats spending time with family and close friends, whether on the lake or just relaxing at the house.

WOMR:  What does your average work week look like?

JA:  As much as I wished that I had a normal work week schedule, sometmes it just doesn’t exist.  With running a Truck team, keeping things going there, and along with doing sponsorhip and PR work, it requires a lot of flexibility and sacrifice of personal time.  Our race shop is in Denver, NC, and I have an office in a hanger at the Concord Regional Airport over in Concord, NC.  So I spend a lot of time between those two places.  Just today I spent most of the day following up on some things that a sponsor and I worked on last night. We have our next race at Michigan coming up in a little over a week.  So I will have to get the truck unloaded from the trailor, debrief it from our last race at Pocono, then go through it and get it all set up for Michigan.  Fortunately, we have been able to use the same truck this year from Daytona to Gateway, Iowa, and even Pocono.  So I count my blessings that I have been able to avoid trouble on the track!

WOMR:  How did you get together with your present organization?

JA:  I first drove for Mike Harmon last year in Homestead, which was during the final race of the 2014 schedule.  I had made my debut in the Truck series a week earlier at Phoenix with another team, but later had my seat bought out from underneath me.  So Mike and I got together and made it happen.  Over the winter I had been working with another team, and did a ton of work trying to build their program up, from sponsorship decks to paint schemes, and so on. A lot of hours were spent trying to secure a sponsorship program for that team.  Just two weeks before Daytona, they decided to go in a different direction, and I was left on the outside looking in. Following this abrupt decision by that team, Mike and I got together again and I shared  with him what had happened.  He offered to help me out by running his truck, but all his time and effort was focused on getting his Xfinity car prepared for Daytona.  His truck was sitting in the shop in pieces!  My job was to get the truck put back together, and to bring all the pieces together that we needed to go to the racetrack.  That has proven to be one of the greatest life lessons I have ever had, because I learned so much in the process. Talk about about working like crazy in a week!  My Dad, myself, and my friend Alex finished working on the truck at 2am Wednesday morning, left the shop, and drove straight down to Daytona just in time to park the hauler at 11 am that morning.  Mike Harmon has been a huge blessing for me this year, he has taught me a lot this season about hard work, and how to make a little bit go a long way.

WOMR:  What are your expectations for the next 12 months, and what are the realities?

JA:  After looking at where I was 12 months ago, and where I am now- it is amazing how much my life has changed and the opportunities that I have had. Hopefully we will keep building up, running more truck races as the season goes on, and continue after finishing strong like we did last week at Pocono.  Top 15 finishes are definitely insight.

WOMR:  How difficult has it been securing the necessary sponsorship dollars to cover your racing costs, and how did you go about securing those sponsors?

JA:  It has been hard this year to keep a balance between working on the truck, keeping it well maintained and prepared, and building up the sponsorship side of things.  Plenty of cold calls and creative thinking have been done, and it’s paid off for the most part.  I have been working hard to try to align myself with a company that would allow us to build and activate a full season sponsorship for 2016. So hopefully a program like that is not too far down the road.

WOMR:  What are you most proud of professionally, and personally?

JA:  This year is something that I am really proud of.  With all the long days and late nights that go into making it to the track each week, every time we unload and show up at the raceteack my face really beams with pride.  On the racetrack, winning the 2007 and 2008 Summer Shootout Pro Division Championships back to back at the Charlotte Motor Speedway was a huge undertaking, and something that I’ll never forget.

WOMR:  What are your strongest traits, and how will that help you through the bumps in the road that will lie ahead?

JA:  I think my understanding of the business side of things will be a big help.  I graduated from college with a degree in business management and studied a lot on marketing and branding.  It has been a huge assest that I use daily to help build up my career.

WORM:  What advice would you have for all the young kids that have their sights set on becoming a professional race car driver?

JA:  To never give up on your goals.  So many times in my life it seemed that I was out of options, but I just kept my faith, kept my eyes on what it was that I wanted to accomplish, and just kept digging.  2014 was one of the least successful seasons in my life as far as my racing career goes, but 2015 has been one of the best.  Had I given up when things got tough in 2014, I would have never made it to where I am today.  My faith is really important to me and that’s something that has kept me focused, and on the right path in this crazy journey that I have been on.  This goes hand and hand with how you handle yourself.  I try to appoach everything with a positve attitude, and keep everyone around me as lifted up and encouraged as possible.  It makes a big difference when you are keeping your crew on the same page as you.

Race fans this should give you an idea of what these young men and women go through to try to make their dreams come true.  What we see on any Sunday during a Sprint Cup race is only the tip of the iceberg of what it took for the majority of those drivers to get to the top tier of racing in the country!  What we don’t see are all the struggles, hardship, and major sacrifices that it took early on in their careers to try to be successful as a race driver.