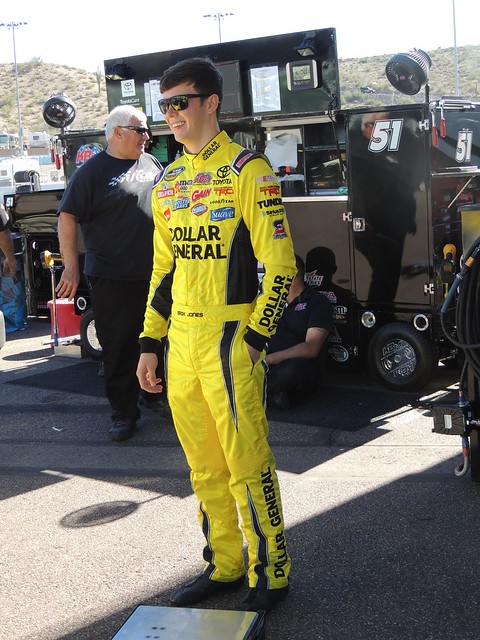 Over the past few months there has been much buzz around NASCAR regarding the nineteen year old young gun in the Joe Gibbs Racing stable, Erik Jones. This young man has caught the attention of just about every team owner and pundit around the NASCAR garage this year.

Jones is in his first full season driving for Kyle Busch Motorsports in the NASCAR Camping World Truck Series. The Michigan native ranks third in the series standings, with four pole positions and one victory in 12 races thus far.

Jones has also competed in 17 of 19 XFINITY Series events this season, with four poles and two wins splitting time between JGR’s Nos. 20 and 54 Toyotas.

Gibbs, appearing on The Morning Drive on SiriusXM NASCAR Radio, said that advancing the 19-year-old driver through the NASCAR development ladder was a top priority at Joe Gibbs Racing.

“We look at Erik as a big part of our future,” Gibbs told SiriusXM, “and we’ve got a plan laid out and it’s not something we’ve talked about in public, but we all kind of know inside of our racing organization, and with his parents and his agent … is just great. So we’ve talked over a plan, and basically the plan next year would be a full XFINITY season and try and run for a championship there and also to, in all likelihood, have him in some Cup races so that would be the goal for next year.”

Jones already has one Sprint Cup start to his credit, making an impressive drive at Kansas Speedway in May in place of the injured Kyle Busch. He also logged a last minute relief stint the month before, substituting for an ailing Denny Hamlin at Bristol Motor Speedway.

Even though JGR has a full complement of four drivers allowed by NASCAR, Kyle Busch, Denny Hamlin, Carl Edwards, and Matt Kenseth,  Gibbs has stated that there is a plan to put together a full time Sprint Cup ride for Jones.

“We’ve got a plan laid out in the future, and it’s something we can’t, you know, we don’t want to talk about now, but there is no question — this guy, Erik’s headed for Cup,” Gibbs said with a laugh. “He’s headed for Cup and we’ve got a path charted that we think is the best to get him ready and to fulfill his goal of being in a Cup car as quick as we can get him there.”

I have watched Jones on numerous occassions, winninng his first Camping World Truck race at PIR in November 2013, winning the Truck race at Las Vegas in September 2014, and I observed a couple of his Xfinity races this year, there is no doubt that he is a very talented 19 year old race driver.  This young gun’s future in NASCAR  is bright that he probably ears sunglasses even at night!