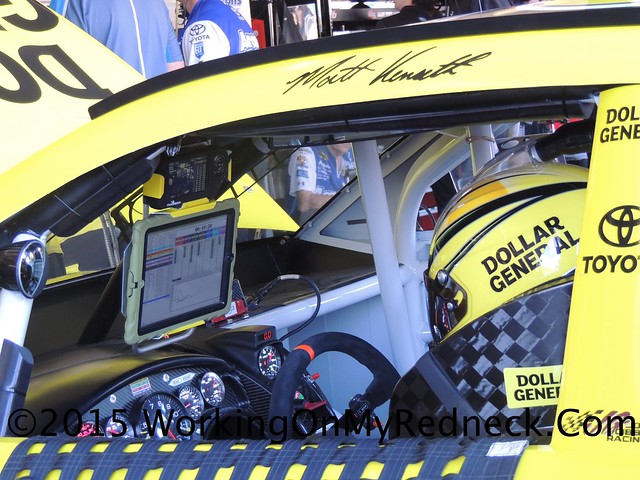 Matt Kenseth blew past car after car that were slowing from empty fuel cells on the final lap of Sunday’s Sprint Cup Series race at Pocono Raceway and went on to win his second race of the season.

The victory was Kenseth’s second of the season, first at Pocono and allowed him to clinch a berth in the 10-race, 16-driver Chase playoffs.

One of the fuel-starved cars which Kenseth passed on the final lap was that of Joe Gibbs Racing teammate Kyle Busch, who was going for his fourth straight victory.

Busch had taken the lead shortly before running out of fuel and who, had he not run out of fuel, would have moved into the top 30 in points – something NASCAR mandated he must do to make the Chase in light of missing the first 11 races of the season with broken bones in his right leg and left foot.

While Kenseth was able save fuel, he said it wasn’t easy.

“It was nerve-wracking,” he said. “I really didn’t think the 48 (Jimmie Johnson) was going to make it but I still really wanted to be in front of him. Once I got in front of him I started saving as much as I could. I figured we had a little bit more than Jason (Ratcliff, crew chief) was letting on. I saved a lot and I was worried about the 2 (Brad Keselowski) and they said he was out so then I just saved as much as I could. I saw the 22 (Joey Logano) and the 18 (Kyle Busch) drop and I was like, ‘Well, the 18 is going to get another one.’ Then, they said he was out off the tunnel. So, it’s really, really hard not to go as fast as you can those last few laps. We had a really fast car today, I just had real bad restarts. The thing was a bullet all day so I don’t care how we got here, we’re here.”

Next week the traveling show moves to the Finger Lakes Region of New York where Kyle Busch has been part of an exhilerating battle to the finish over the past three years.  With just five races left to make up the 13 points necessary to climb up to 30th position in the standings, and thereby lock his team into The Chase, the smart money is on KyBu doing well in those final five races and grabbing a Chase spot.

TI NEXT TIME, I AM STILL WORKING ON MY REDNECK!