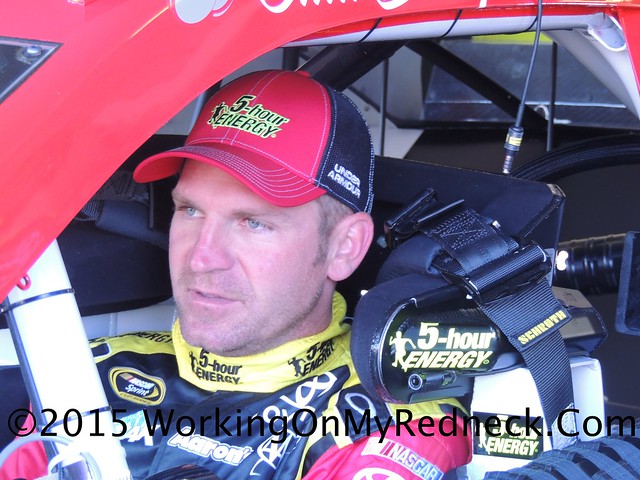 “We have got to finish this year strong!”

Michael Waltrip Racing driver Clint Bowyer met with media Friday at Pocono Raceway and gave a statement that echoed the “focused on 2015” sentiments expressed by MWR a day earlier that team owner Rob Kauffman had purchased an interest in Chip Ganassi Racing with Felix Sabates.

“You need to bear with us,” Bowyer said. “There’s obviously some change on the horizon. I got the same release you guys did.

“We’ve got a new sponsor on the car this weekend. It’s a big deal for us. We’ve been working on this a long time. Got a lot of momentum going into this. We’re 20 points out of the Chase. We’ve got to finish this year off strong.

“Like I said, there’s a lot of work to be done in the future, and we’re all working on it. When I have something to tell you guys, you all know me, and I’ll tell you.”

According to Thursday’s statement, MWR and CGR would “continue to operate separately and compete against each other for the remainder of the 2015 season. They are also currently evaluating ways to field the most competitive race teams possible to provide an excellent platform for their partners and employees for the 2016 season and beyond.”

The sponsor Bowyer referenced, Maxwell House, will run the first of four races this season as a primary on his No. 15 Toyota Camry in Sunday’s Windows 10 400.

“There’s obviously change on the horizon, and we’re going to have to work on the future and see what that looks like but for right now, we’re focused on 2015 — getting Maxwell House to Victory Lane this weekend and getting in this Chase,” Bowyer said. “We’re close, and this can happen and these guys got to stay focused. I’ve got to stay focused. If we do our job, we can get in this Chase and compete for the championship.”

So even Clint Bowyer is not shedding too much light on the bombshell announcement that hit the media Thursday afternoon regarding the Rob Kaufman buy in to Chip Ganassi Racing, and the future of Michael Waltrip Racing.