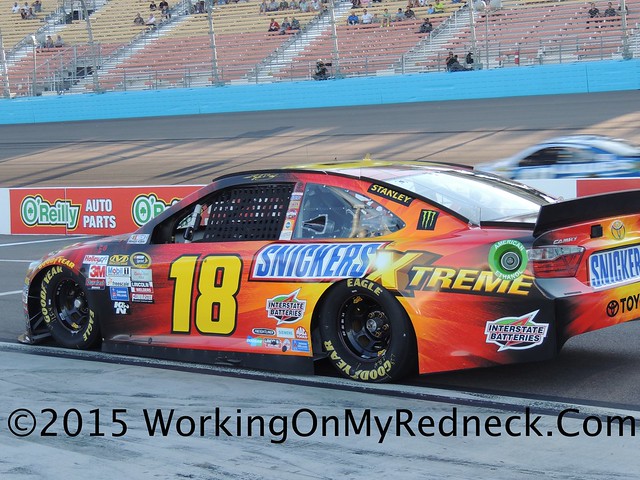 A lot of people consider Kyle Busch to be the best restart man in NASCAR. He certainly was on Sunday as three times over the final eight laps, Busch used perfect restarts to win the Brickyard 400 Sprint Cup race, Crown Royal presents the Jeff Kyle 400, at Indianapolis Motor Speedway.

The victory was the fourth in the last five races and third in a row for Busch, who missed the first 11 races of of the season after braking bones in his left foot, and a compound fracture in his right leg, in an XFINITY Series race at Daytona in the season-opening weekend.  The last Sprint Cup driver to win three races in a row was Jimmie Johnson back in 2007!

The victory was the first for Busch at the fabled Indianapolis Motor Speedway and improved his chances of making the season-ending Chase, even though he missed those 11 races .  In Busch’s favor, NASCAR ruled that Busch could make the Chase were he to win a race and put himself in the top 30 in points when the playoffs start.

After taking the checkered flag and kissing the bricks, Kyle leaves IMS just 23 points out of 30th place, the last stumbling block to gaining access to The Chase.

With 20 laps to go, a debris caution flag waved, Keselowski pitted and Harvick had the lead. Edwards restarted second with 14 laps to go while Busch was third, Truex Jr. fourth and Logano fifth.

On the restart, Edwards and Logano banged doors, Edwards got sideway and Busch blew past both to claim second place. But a lap later, Dale Earnhardt Jr. and Hendrick Motorsports teammate Kasey Kahne got together and another yellow flag waved.

On the restart with eight laps to go, Busch, starting on the inside, edged past Harvick and into the lead. Once in the lead, Busch pulled away to a five-length lead on Harvick. But with six laps to go, the yellow flag again waved for debris to set up a restart with two to go.

Busch opted for the bottom line on the restart, lining up in front of Logano, who gave him a bump push on the previous restart.

On the restart, Busch again broke free as Harvick spun his tires. Moving past Harvick were Logano and Truex. But before a half lap was completed, Trevor Bayne spun back in the field, out came the yellow and the race went to a green/white/second restart situation.

On the restart, Busch again got the advantage but right on his rear bumper was Logano.

On the final lap, Busch pulled away to a five-length advantage and took the checkered flag for the victory.

At this point of the season, and because of the injury suffered at Daytona, it is safe to say that right now Kyle Busch is hotter than the Georgia asphalt!