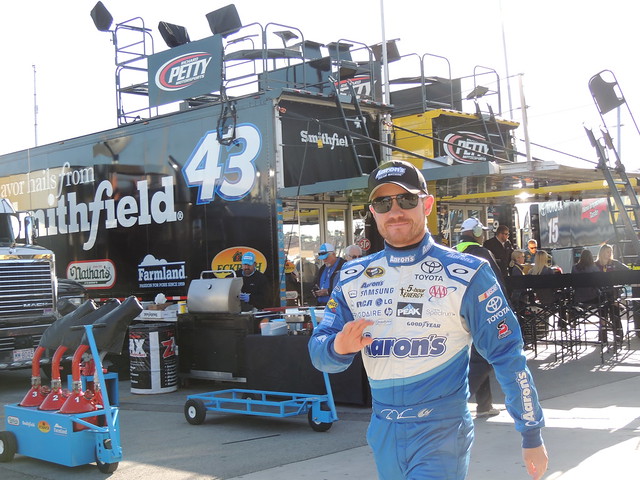 Will Brian Vickers really be able to get back behind the wheel of a Sprint Cup Series car next season?  That seems to be a burning question that only time will tell.  But following Vickers’ interview with FOX Sports.com he seems to think his return in 2016 is a very good possibility!

Since being sidelined after a recurrence of blood clots in mid-March, Brian Vickers has attended the Kentucky Derby and gone hiking in Colorado.  He does not appear to be missing out on life and all the things that goes with being young, out-dooorsy, and wealthy. Nevertheless, Vickers has been off the grid due to medical issues of the fairly serious nature for the fourth time in his career.  This year Vickers has missed all but two races this season, and because of the medication prescribed to him, won’t return to competition until 2016 at the earliest.

Following his latest blood clot health scare, many observers questioned if the Michael Waltrip Racing driver would ever race again at all. As of today, he’s hopeful of yet another comeback.

“Everything’s good,” Vickers said in an exlusive interview with FOXSports.com. “I feel great. I really feel like I could be, and want to be, back in the race car. That doctors are giving me … we’ve worked with the doctors on finding a really good plan to get me back in the car safely and still being protected from having another blood clot, and it looks like we pretty much have figured out what we need to figure out to make that happen and are just kind of finalizing a few things with a couple tests, and then I’m basically good to go, really.”

Vickers wants to come back beginning with 2016 Daytona Speedweeks, however. “It’s not etched in stone yet,” the three-time Sprint Cup Series race winner and 2003 XFINITY Series champion said. “We’re still making sure and really just kind of taking my time with the doctors to make sure we’re absolutely making the right decision, and so far it looks very promising. And then the next step is finding a good car, which is a challenge in and of itself. We’ll see where it all ends.”

Vickers’ corroborated Ragan’s assertion in an interview with FOXSports.com last month at Sonoma that MWR could become a three-car team again next season, theoretically opening the door for both Ragan and Vickers to compete with the organization. “Is it a possibility? Absolutely,” Vickers said. “I think it would be good for MWR to get back to three cars. Obviously, the performance is definitely better when we have three cars, but we’ll see. There’s a lot of things up in the air and a lot of moving pieces.”

So just when most of the media had pretty much written off Vickers’ return to the Sprint Cup, it is quite evedent that he is set on making a return to this series in 2016!