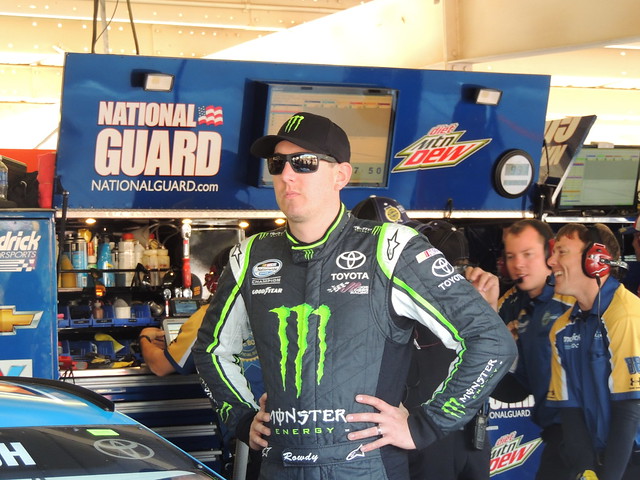 Adapting to a new competition package for NASCAR Sprint Cup Series cars specifically for Kentucky Speedway, Busch sped to victory Saturday night.  That victory was a giant step toward the Chase for the NASCAR Sprint Cup.  This was his second victory in seven races, and his second vicroty in the last three races since returning from an 11-race injury absence.

In light of Busch’s near catastrophic injury in the opening XFINITY race at Daytona, NASCAR has granted him permission to race in the 10-race, 16-driver Chase if he wins a race and finishes in the top 30 in points.

The Kentucky won for Kyle was the 31st time in his career and the second time at this 1.5-mile track.

Even though Busch has trimmed his deficit down to 87 points needed to get into a tie for the 30th position in points after leaving Kentucky, with only nine races left to catapult his team into that position, he has his work cut out for himself and the team.  With this second win of the season, Busch’s Chase hurdle gets ever so smaller, and more easily to accomplish.

The bottom line is that Kyle must score 88 more points than the current 30th place driver now, Cole Whitt.  The JGR #18 team has made great strides over the last three weeks towards getting into the top 30 in points.  This team has had two mulligans since Busch climbed back into the driver’s seat, and with just nine races left before The Chase contenders begin their playoffs, the entire team cannot miss a beat, have a bad pit stop, have any penatlies in the pits, or have a mistake from the driver.  If the teams mirrors perfection for the next nine races, then there is a chance that the JGR #18 and Kyle Busch will be part of the 16 team playoffs known as The Chase.

Check out the unofficial results from The Quaker State 400.

Check out the Sprint Cup standings after Kentucky.