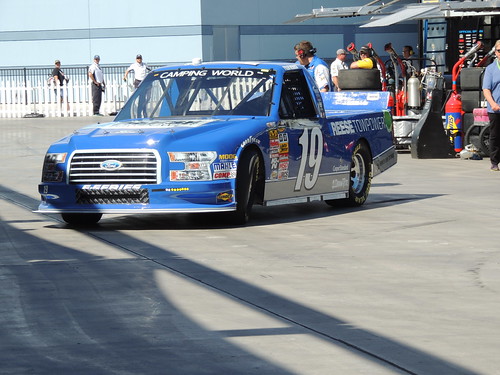 The victory was Reddick’s second of the season in the No. 19 Brad Keselowski Racing Ford, and in the driver’s view, it atoned for last year’s eighth-place finish, in which Reddick really underestimated the physical toll high-speed racing at Dover can exact from the driver.  Specifically, in last year’s race Reddick complained that his leg fell asleep early in the race, an indecation as to how tough this race track is to race on!

“After what happened to myself last year, not knowing a lot about the g-forces in the corners here—I was kind of green when it came to asphalt racing,” Reddick said. “We had a top-five truck last year, and to have something like that impede our progress in what would have been our first top five… to have something like that mess up what could have been potentially a breakout day for us are the things you can’t have happen in racing.

“I really wanted to come back here and run really strong, just like I want to run strong every given race. But (last year) gave me a little bit of extra fuel for the fire, and I knew I had to run good here—and we did.”

Although Jones lost one position to Reddick in the series standings, he moved closer to Crafton, now trailing the two-time defending champion by 14 points. Sauter is fourth, 40 points behind Crafton, and could be considered the only other driver within realistic striking distance of the leader at this point in the Camping World Truck Series this early in the season.

For the third race in row, two truck races and one XFINITY race, the Joe Gibbs Racing young gun, Erik Jones, led the most laps of any competitor, but was unable to close the deal in the end!  It has to be very disheartening to be the dominate horse in all three races and not bring the hardware home!  Jones must be thinking, “what else can I do”?

Check out the unofficial results of the Lucas Oil 200.