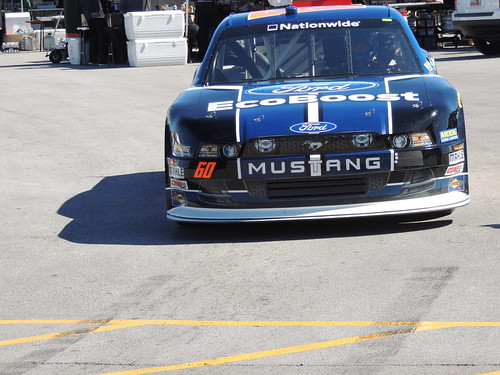 Chris Buescher won Saturday’s Buckle Up 200 NASCAR XFINITY Series race at Dover International Speedway.  But it is safe to say that he didn’t score any style points with his Roush Fenway Racing teammate, Darrell Wallace, Jr. on Saturday afternoon!  It will also be safe to say that the ride back to Charlotte on the team plane, as well as the team meeting Monday morning at RFR, will be an uncomfortable for Wallace and Buescher!  I think that most of the sentences will be sprinkled with four letter adjectives!

You see, even though both Chris Buescher and Darrell Wallace,Jr. were trying to save as much fuel as posssible, in order to make it to the end of the race,  Buescher had enough fuel left at the end of Saturday’s Buckle Up 200 NASCAR XFINITY Series race at Dover International Speedway to do a celebratory burnout. Unfortunately, his No. 60 Roush Fenway Racing Ford wasn’t the only thing that was smoking after the checkered flag.

Yes, Buescher won for the second time this season, and he extended his lead in the series standings to 15 points over eighth-place finisher Ty Dillon, however, his winning pass of teammate and Coors Light Polesitter Darrell “Bubba” Wallace Jr. left Wallace fuming!

Contact between the cars on Lap 191 of 200, when Buescher for the second time bumpjed into the rear end of Wallace’s race car.  This time Buescher rove his car really hard and deep beneath Wallace’s car hitting the left side side of the No.6 Ford.  That impact cut the left front tire of Wallace’s No. 6 Ford and forced his car to pit road for an unplanned stop.

While Buescher spent the final nine laps coasting to an 11.477-second victory over runner-up Matt Kenseth, stretching 98 laps out of his last tank of fuel, Wallace left the Monster Mile in 17th place — and understandably extremely unhappy about the way Buescher ran over him to get the race lead.

“I was saving fuel there, and Chris just ran over me and he ends up winning,” Wallace said. “It should be interesting Monday morning (in the team competition meeting). We just got run over. It sucks that it was my teammate. I thought he got help from the 7 (third-place finisher Regan Smith), but I just saw the replay there.

So it looks like The Cat in The Hat, Jack Roush, will have his work cut out Monday morning trying to get this fracas strightened out before the next XFINITY race!