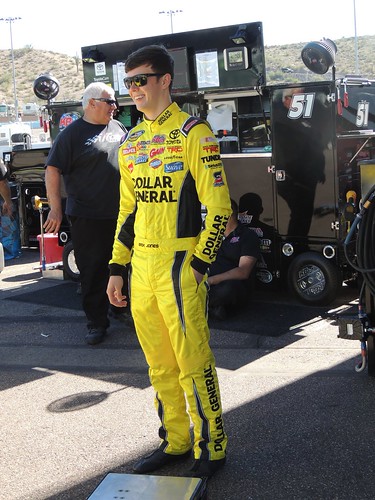 Erik Jones had the fastest, strongest horse Friday night at Kansas Speedway.  There was not a truck that could stay with him for more that a couple laps after the dropping of the green flag, and after each of the restarts.

Jones would just “Jones them”, that is the Kyle Busch Motorsports driver of the No. 4 Toyota would just pull away from the pack each and everytime!  At one point he had a 12 second lead on the second place driver.

It was quite eveident that this racde was going to be all Erik Jones’ all race, he led 151 laps!  Then the unthinkable happened.  With just four laps to go Jones ran out of fuel, pitted, and had to settle for 11th place!

Also running out of fuel while in contention for the victory in the final laps after Jones dropped out were Tyler Reddick and Daniel Suarez.

“It just sucks – we had by far the best truck,” Jones said after the race. “We were up to an 11-second lead at one point and it’s just so terrible for these guys when we bring that fast of a truck. We couldn’t bring the win home and I saved as much as I could most of the run. The 19 (Tyler Reddick) made us run pretty hard. Being eight laps short, I don’t know how the 88 (Matt Crafton) made it. It’s too bad, we’ll have to bring another fast truck next weekend to Charlotte and we’ll go get a win there.”

What a bummer for this up and coming develpmental driver for Joe Gibbs Racing!  To be such a dominating force all race, never a question as to his winning the race, and to run out of fuel with just four laps remaining is totally heartbreaking!

Nevertheless, keep your eyes on this young man from the sleepy hamlet of Byron, MI, population 581 souls. You have not heard the last from Erik Jones becasuse has a very bright future in NASCAR.