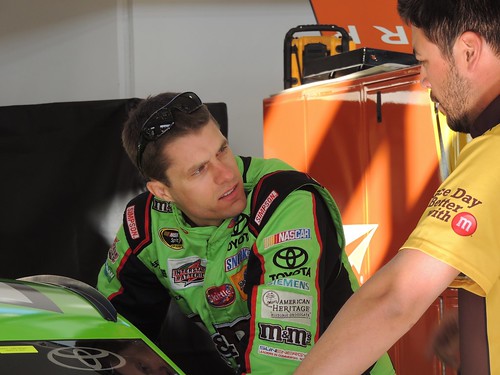 This was another horribly kept secret!

Michael Waltrip Racing announced a couple of days ago that David Ragan will drive the No. 55 Aaron’s Dream Machine for the remainder of the 2015 NASCAR Sprint Cup season, beginning May 9 at Kansas Speedway.

Brian Vickers had planned to race the Toyota fulltime in 2015, but heart surgery in December forced the Thomasville, N.C., native to miss the first two races of the season. Vickers returned at Las Vegas on March 7, but was sidelined two weeks later by recurring blood clots in his lungs. No timetable has been set for his return.

Michael Waltrip, who drove the No. 55 Aaron’s Toyota in the Daytona 500, will compete this weekend at Talladega Superspeedway. Brett Moffitt owns six starts in the No. 55 this year, with a career-best eighth-place finish at Atlanta Motor Speedway in March.

Ragan is 19th in NASCAR Sprint Cup driver points earned largely by racing the No. 18 Toyota for Joe Gibbs Racing as the substitute for the injured Kyle Busch.

“Life has thrown a lot at MWR the first part of this racing season, but our team has stood tall and worked through it,” said Waltrip. “Our original plans for the No. 55 team have been challenged since December and we felt it was important for our employees and our sponsors to solidify the remainder of the 2015 season. The opportunity to bring David Ragan into the team is incredible for a number of reasons. He will bring experience, consistency and a lot of confidence based on how he has been running with our Toyota teammates at Joe Gibbs Racing. He also puts the No. 55 team and Aaron’s right back into the Chase for the Sprint Cup contention, which is a very positive turn of events for that team.

The 29-year-old Ragan, who celebrates his 300th Sprint Cup start at Talladega this weekend, said he eagerly awaits driving for his new team.

“The only way I can repay all the people I have to thank for making this happen is to go out and win races and get MWR, Aaron’s and Toyota in the Chase,” said the Unadilla, Ga. native who owns two career Sprint Cup victories. “It’s going to be awesome knowing when I climb in the No. 55 at Kansas that car will be mine the rest of the season. I look forward to working with (teammate) Clint Bowyer, the crew and shop employees at MWR. It’s tough what’s happened to them this year but I hope I can come in and make 2015 something special.”

Because of Ragan’s sub role at Joe Gibbs Racing, and his ability to keep the JGR No. 18 Toyota up in the points, it is obvious that has led to Michael Waltrip Racing taking an interest in signing David Ragan to a contract for the ramaining races of the 2015 season. Coupled with the fact that Brian Vickers is most likely done racing in NASCAR, and the fact that Ragan did an excellent job at MWR, it looks like he (Ragan) might have ressurected his career with a competitive Sprint Cup team!