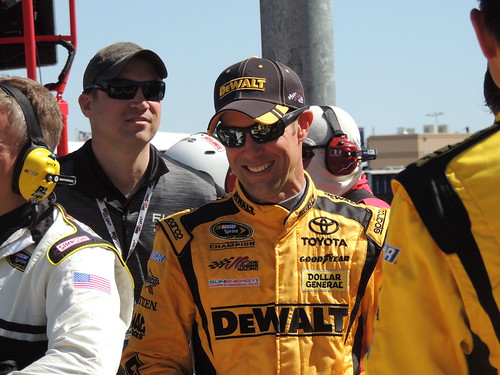 The last time that Mattt Kenseth drove his Joe Gibbs Racing #20 Toyota into the Victory celebration was at Louden in September 2013, 51 races ago!  However, he ended that long dry spell as he survived a series of rain delays, wrecks, and overtime (green-white-checkered) laps to earn his first Sprint Cup victory since 2013 on Saturday night when he won the Food City 500 In Support Of Steve Byrnes And Stand Up To Cancer at Bristol Motor Speedway.

In a NASCAR Sprint Cup Series race that went 11 laps past its scheduled distance of 500 laps — making it the longest race in the history of the 0.533-mile short track — Kenseth crossed the finish line 0.287 seconds ahead of Jimmie Johnson, who recovered from a succession of issues to claim the runner-up finish.  This victory was Kenseth’s fourth at Bristol, his most at any track, and the 32nd of his career.

Kenseth, who inherited the top spot when Kurt Busch pitted from the lead under the ninth caution on Lap 477, stayed out front the rest of the way. He (Busch) was three car lengths ahead of third-place finisherJeff Gordon when Carl Edwards got loose underneath Gordon’s No. 24 Chevrolet and ignited the wreck that brought out caution No. 11 and demolished Busch’s Chevy in the process.

After a brief delay because of a late shower, a definite far cry from the 3-hour, 58-minute hiatus that came after the first 22 laps, the re-ignited Kenseth pulled away on a green-white-checkered-flag restart.  Kenseth  was unchallenged to the finish, while Johnson got past Gordon for second on the last lap.

“It means a lot,” Kenseth said. “I have a great race team. Last year was tough and not winning again this year so far has been tough. We’ve been putting ourselves in position. Really need to thank Jason (Ratcliff, crew chief) and all these guys – our pit stops have been great. I haven’t been doing as great and the cars haven’t been as good, but these guys have been really doing it.”

This win for Kenseth adds his name to the list of drivers that include, Harvick, Logano, Johnson, Hamlin, and Keselowski, that are all but locked into The Chase for 2015 so far.

Check out the race results from Bristol.