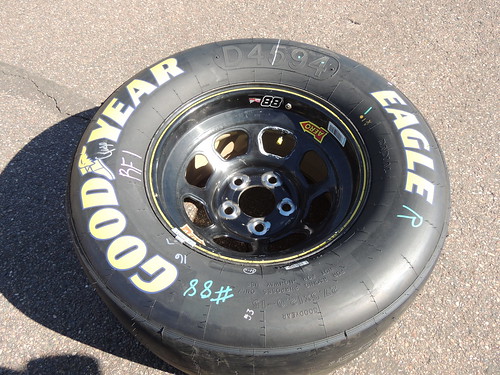 The single biggest topic of conversation over the past few weeks in the NASCAR garage has been tires.  More specifically race teams altering tires by mysteriously bleeding off excess tire pressure.

Starting at the end of the 2014 season, NASCAR began taking tires from select teams as their post-race inspection process. The practice began again this year starting with the third race of the Sprint Cup Series season at Phoenix International Raceway.

The rumor in the garage has been team are poking tiny 0.001- to 0.002-inch holes in the sidewall of the tire to bleed air pressure, allowing the tire to reach optimal pressure sooner and greatly maximizing grip.

Last week, NASCAR issued a P5 penalty to the No. 31 Richard Childress Racing team for manipulating tires at Auto Club Speedway. NASCAR did not say specifically how the tires were altered, and the team has appealed the penalty.

Make no mistake, it is clearly a violation of the NASCAR rules to bleed off excess tire pressure!  But why is it bad for the structure of the tire to do so?

Greg Stucker, director of racing for Goodyear, sat down with FOXSports.com Friday at Texas Motor Speedway to explain.

“The tire is a structure and it’s kind of a membrane, it requires the air pressure to give it rigidity and to give it the load-carrying capacity that we need,” he said. “It’s not just the tire itself; it’s a combination of the tire and the inflation pressure that’s in the tire, the air that you put in the tire that enables it to carry that load.”

“The other thing is … you run the risk of damaging the structural members of the tire itself,” he said. “The tire has cords; it has fabric that creates its structure. If you damage one of those cords, then you lower the integrity of that component. You certainly have a high risk that the tire could fail because you’ve damaged one of the components.”

While it remains unclear how teams are allegedly altering the tires, Stucker said it is not Goodyear’s role to police what happens to the tires once in teams’ hands.

So while NASCAR made it clear with the penalties to Newman and the No. 31 RCR team that altering tires isa major offense, there is much more to the reasons behind the rule. According to Stucker, altering tires is not a concern for Goodyear in terms of competitive advantage; it is really all about maintaining the integrity of the tires on each car on the track.

It is Working On My Redneck’s view that we have not heard the last on the subject of tire pressure bleeders in this sport!