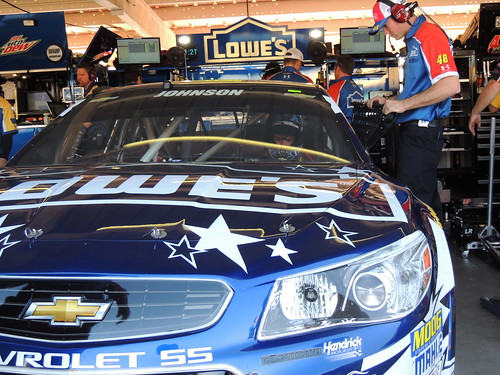 Most everyone is somewhat familiar with the old tennis adage that concludes a dominating performance, “game/set/match”.  Well Saturday night, at the Texas Motor Speedway, Jimmie Johnson and the whole Hendrick Motorsports #48 Lowe’s team fit the description of a dominating race team!

Johnson continued his recent domination of Cup races at Texas Motor Speedway Saturday night, rallying after a late pit stop for a victory in the 19th annual Duck Commander 500.  Johnson led a race high of 128 laps of the scheduled 324 laps!

Mr. Six-Pack, Johnson, took the lead on Lap 321 of the scheduled 334 when he drove under and past Jamie McMurray and Kevin Harvick exiting the dogleg of Texas Motor Speedway high-banked, 1.5-mile quadoval. The final 14 laps featured a battle between Johnson and Harvick, the reigning Cup champion, who finished second despite scraping the Turn 4 wall on Lap 331.

Johnson scored his fifth win at TMS and third in his last six starts, but his first victory in the spring event there. The six-time Sprint Cup champ scored his first win of the season at Atlanta Motor Speedway, a sister 1.5-mile layout to TMS, in round 2 of the 2015 schedule. “I think the tracks with high-wear and bumps…I think the surface fits my style and Chad’s style (crew chief Chad Knaus) and what we do together,” Johnson said in reference to crew chief Chad Knaus.

“The end of the race was nutty,” said Johnson, who said he woke up sick Saturday morning and addressed the media post-race through a scratchy voice. “Those last three pits tops with the varied tire strategies, our car wasn’t handling like it did when we were leading. The third one (on Lap 310), our car was really, really good and I was able to work our way forward. The No. 4 was having trouble with the No. 1 (of McMurray) and slid up. I was able to get by both of those guys and check-out. Just a lot of great racing; the (worn-out) surface of this racetrack allows that to happen.”

“This is a racetrack that falls into Jimmie’s liking,” said Knaus, still sporting his Victory Circle Stetson. “Do we always race at night (here) in the spring? We’ve run very, very well here in the spring race so I think it was just circumstances that we hadn’t been able to pull it off previously. Nothing specific.”

Johnson led on nine occasions for a race-high 128 laps to become the third driver to record wins in the spring and fall races here, joining Denny Hamlin and Carl Edwards, both of Joe Gibbs Racing. Harvick, a two-time winner this season for Stewart-Haas Racing, also led nine times for 96 laps.

At this point in the season it is looking like two very dominating race teams, the HMS No. 48 Lowe’s Chevy and the SHR Budweiser/Jimmy Johns Freaky Fast Chevy, are starting to stake their claims as the teams to beat each and every week in 2015!

Check out the unofficial results of the Duck Commander 500 at Texas Motor Speedway.