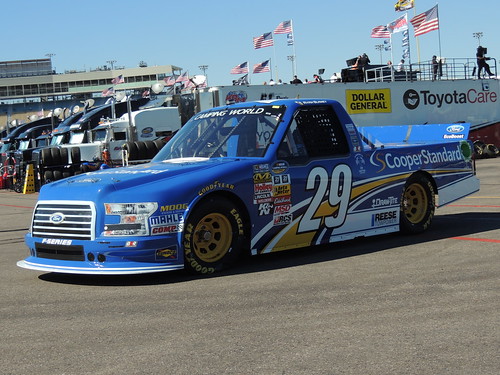 Driving hard and deep into the first turn on the green-white-checkered restart in overtime, making it  three-wide, Logano got down heavy on the loud pedal, took the lead coming out of turn two enroute to his very first win in the Camping world Truck Series race, and taking home the second most coveted trophy, the Martinsville grandfather clock, outside of the Harley J.Earl trophy for the Daytona 500.

The Coors Light Pole Award winner, had to make to vault from third to first and win Saturday’s Kroger 250 NASCAR Camping World Truck Series race at Martinsville Speedway in an event that went eight circuits past its posted distance of 250 laps.

Logano led 150 laps in winning the first NCWTS race of his career and becoming the 26th driver to take a checkered flag in each of NASCAR’s top three national touring series.

“I just had a great restart,” Logano said of the winning move. “The tires worked out well. I prepped them good down the back straightaway and made sure I had them clean enough. I got a good jump, a fourth-gear grab there, drove it in there and hope I got past him—and it was able to stick down there…

Logano is the first driver to put a Ford truck in Victory Lane since Ricky Craven in 2005.

Check out the unofficial results from the Kroger 250.