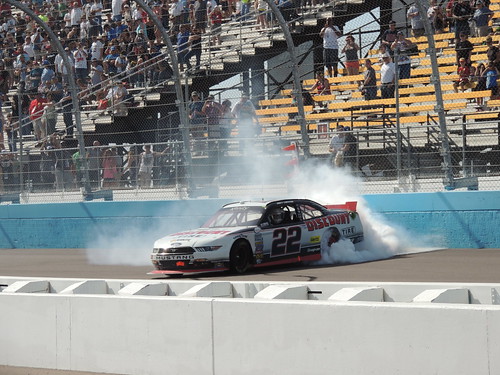 One word will sum up Joey Logano’s victory Saturday in the Xfinity race at Phoenix International Raceway, domination!  However, Logano uses another word to sum up his victory at PIR, “finally”!

Logano had reason to be frustrated. He had finished second in his last four XFINITY Series starts, the last three after winning the pole. And the driver of the No. 22 Team Penske Ford hadn’t been to Victory Lane in the series since Sept. 28, 2013 atDover International Speedway.

On Saturday, however, Logano won the pole, started up front, dominated the whole field, and “finally” closed the deal. Though race runner-up Matt Kenseth dogged his rear bumper all day long and closed to .294 seconds at the finish, he couldn’t catch the No. 22 Ford, which led 176 of the 200 laps at the one-mile track.

“It felt good,” said Logano, who collected his second win at Phoenix and the 22nd of his career. “It took a long time to get our next win. We’ve been so close to winning — obviously, a lot of poles and things are going well. We just needed a little more speed, and it was awesome to get it today.”

“I was able to take off faster on restarts and get a nice lead and then Matt’s car was looser than mine, so that is why I was able to get a lead,” Logano said. “Once we started running a few laps, I would get tight and he would start catching up to me because his balance was a little more free.

“I kept hoping for lapped traffic, because I was better in traffic, and that’s where I made up time.”

It was quite evident, all day, that nobody had anything for that Team Penske No. 22 Discount Ford!

Looking back over the last three or four years it really didn’t make a difference who the driver has been in this car, “Blazingly Bad” Brad Keselowski, Joey Logano, or young gun Ryan Blaney, it did not make a difference if it was badged as a Ford or a Dodge, this team is alway prepared with a bullet when they come to the race track!

Check out the unofficial race results of the Axalta Faster Tougher Brighter 200.