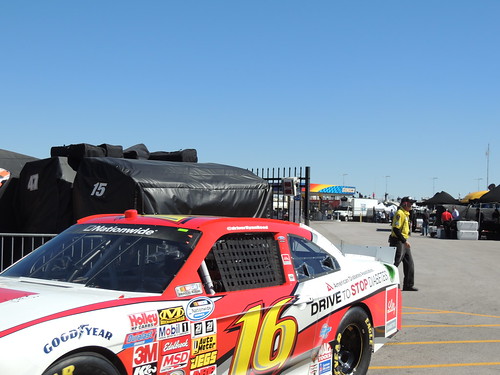 Reed’s Roush Fenway Racing teammate, Chris Buescher, finished second and making it a clean sweep for RFR.  Ty Dillon, grabbed a third place finish, followed by his older brother, Austin Dillon.  Brad Keselowski, who was leading the race in the final stages, was in fifth place at the checkered flag.

There were two big wrecks during the race.

The first coming with 27 laps to go involved 12 cars.  Regan Smith got the worst damage, flipping his Chevy and getting pummeled by several cars as he ground to halt just past the start/finish line.  Even though it was a spectacular crash, he was unhurt.

Then with 7 laps to go, a wreck involving 10 cars included Kyle Busch sliding into an interior retaining wall nearly head on. That area of the inside retaining wall is absent any of the SAFER barrier that is known to soften those horrendous high speed confrontations with tHE crash walls.

He was helped from his car and transported to the hospital for further evaluation, where it is reported that he suffered injuries to his right leg and left foot.