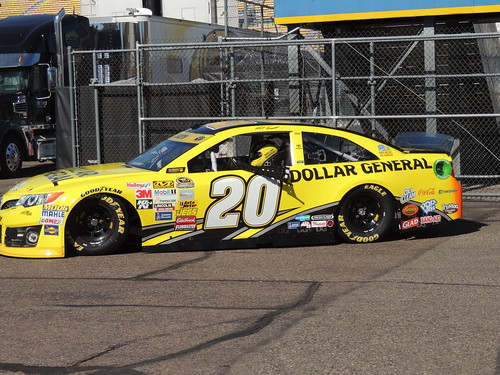 Despite the fact that he did not score a single victory for the entire 2014 season, and notwithstanding the fact that the Sprint Unlimited race had elements of a wreck-fest, Matt Kenseth stood on the loud pedal and jumped into the lead on the final restart, leading everyone to the checkered flag, thereby giving Kenseth a non-points victory in the first race at Daytona International Speedway.

Kenseth led 21 laps en route to the win in a race that featured several big wrecks that involved some of the sport’s biggest names.

The first caution came as a result of a wreck involving Brad Keselowski and Kyle Larson, with some minor damage suffered by Kyle Busch and Austin Dillon. Larson appeared to make some contact with Keselowski as he was moving up the track and the 2012 Sprint Cup Series champion slid a bit through the infield, smacking the wall before sliding down the track.The race was was running smoothly again until Jamie McMurray got loose after some contact from Greg Biffle.  That bumping and banging of Jamie Mac and The Biff touched off the ‘Big One’ in the Sprint Unlimited on Lap 45, which affected more than half the 25-driver field.Kevin Harvick, Kasey Kahne, Denny Hamlin, Tony Stewart, Clint Bowyer, Ricky Stenhouse Jr., Kyle Busch, Matt Kenseth, Paul Menard, Kurt Busch, Aric Almirola and Jimmie Johnson also all suffered varying degrees of damage from that accident.

On lap 68 Tony Stewart was running inside the top three when his race car got loose and instigated another big crash. As a results of Stewart spinning, and taking evasive action, Greg Biffle took a hard into the wall from the wreck. Kurt Busch, Jeff Gordon and Kyle Busch were also involved in the accident.

The wreck involving Tony Stewart on Lap 68 brought out the second red flag of the Sprint Unlimited, and set up a four-lap shootout to determine the winner!

On the final restart Kenseth proved that his Toyota was just too strong for anyone to mount any kind of a charge for the lead!  They just had nothing for him at that point of the race, and he set the table for what might be expected from his team next week in the Daytona 500.