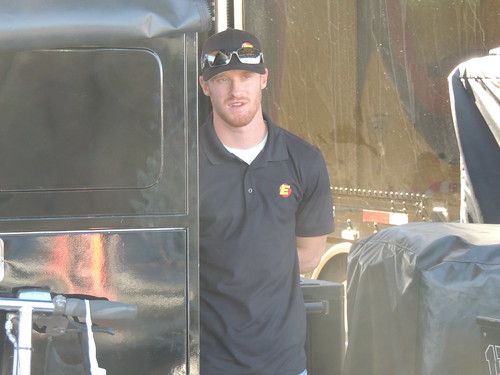 Fortunately for Burton, Duke and Rhonda Thor of Thorsport Racing offered him a ride in a third truck for 2014.  However, after a very successful campaign in 2014, and for the second consecutive January, Burton found himself loosing the primary sponsor and watching his race team close shop once again!  This offseason seemed to be like the movie “Ground Hog Day” to Burton.  He was once again scrambling for a job in NASCAR.

Today, however, BK Racing has announced that it has signed Jeb Burton for the 2015 NASCAR Sprint Cup Season, as the driver of the #26 Toyota Camry.

Jeb Burton, the son of Daytona 500 Champion Ward Burton, will be competing in his first NASCAR Sprint Cup Series season as a Rookie of the Year Contender. Twenty-two year old Burton has had a great start to his racing career with one Camping World Truck Series win, seven Top 5’s, nineteen Top 10’s and seven Coors Light Pole awards. After finishing in the Top 10 55% of the time in the trucks series, and sitting on the pole 14% of the time, Burton looks to make an unforgettable debut in the top series in motorsports, starting February 22nd Daytona.

BK Racing Co-Owner, Anthony Marlowe commented on Jeb Burton joining the team, “We are very lucky to have a great, young talented driver like Jeb Burton in one of our NASCAR Sprint Cup cars. It was important for us to find full-time anchor drivers for this season that are experienced and team-oriented. Jeb’s success in the NASCAR Camping World Truck Series along with his family’s history in the sport makes his emergence into Cup a great story. The story, which also includes having a strong shot at winning Sunoco Rookie of the Year in 2015, has already proven to be very marketable. I look forward to seeing Jeb behind the wheel of the #26 Toyota Camry very soon. I think he is going to do great in the Daytona 500.”

“I am so thankful for the opportunity that BK Racing has given me,” Jeb commented. “It has been a dream of mine to race in the Daytona 500 ever since I was 9 years old and I stood with my Dad in victory lane. I remember thinking to myself then in 2002, I would like to win the 500 one day. Now I have a chance at making that dream come true. I am looking forward to making the 500, providing the best possible finish I can by running and racing hard every lap this season. I also look forward to competing for the 2015 title of Rookie of the Year. Each week, I will be concentrating on finishing on the lead lap and learning as much as possible.” Additionally, Ward Burton will be a team ambassador for BK Racing and join Jeb in select appearances throughout the 2015 NASCAR Sprint Cup Series Season.(BK Racing)

So Jeb went from being unemployed for the second straight year in the Camping World Truck Series to now having a job as a Sprint Cup driver for, albeit, a smaller semi-under funded race team, and a team that has had two separate issues with drivers leaving mid-season over pay issues.