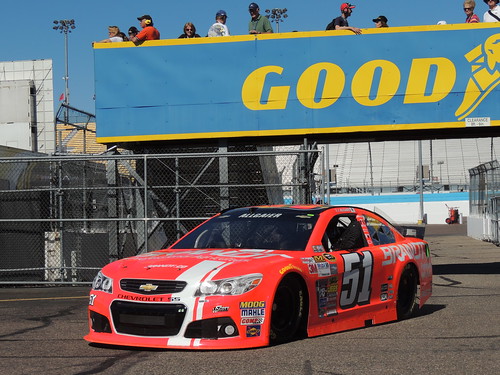 2015 brings HScott Motorsports a brand new look as it expands to two cars. Justin Allgaier will return to the No. 51 BRANDT Chevrolet while Michael Annett joins the team and will bring his long time partner Pilot Flying J to be the primary sponsor.

“The addition of a second team increases HScott’s overall ability to better utilize its resources at track and at the shop to be even more competitive,” said team owner Harry Scott Jr. “I’m proud to have seen Justin truly mature as a NSCS driver last year, and I can’t wait to see what he does this year. Like Justin, Michael is coming off his rookie year following six years of competition in the NASCAR Xfinity Series. Michael is a quality driver with a great future at HScott Motorsports. These drivers compliment one another and will make great teammates.”

In his rookie season, Allgaier posted 10 top-20 finishes, including 17th at Bristol; 16th at Michigan and Pocono; and 15th-place finishes at Charlotte and Homestead to conclude the 2014 season.  That is a real accomplishment for a brand new startup Sprint Cup race team.

“This is as excited as I’ve been for a new season, I can’t wait to get to Daytona and fire the engines,” said Allgaier. “I’m looking forward to carrying the momentum from the end of last season over to this year. Michael is a great addition to our organization and I’m glad to have a teammate to compete with each week.”

Allgaier’s new teammate, Michael Annett, competed in all 36 points races during his 2014 rookie NSCS campaign and posted several top-20 finishes, including 19th at Fontana, 16th at Talladega and 18th at Kentucky. From 2008 through 2013, Annett competed full time in the NASCAR Xfinity Series, where he started 163 races and earned seven top-five and 34 top-10 finishes. Prior to his NASCAR career, Annett competed in the ARCA Racing Series in 2007 and 2008, winning races at Talladega and Daytona.

“I’m excited for the opportunity to drive for HScott Motorsports,” said Annett. “I am impressed with the way Harry is building his NASCAR teams. Harry and competition director Steve Addington have a long-term vision and I’m honored to be part of it. I’m also looking forward to having Justin as a teammate.”

Even though HScott Motorsports did not announce what number the new race team would race under, last year HScott Motorsports had a second team compete, with Bobby Labonte at the wheel in the Daytona 500, using the No.52 for that race team.  With that in mind, look for the new HScott team to, most likely use No. 52 for Annett’s new ride.