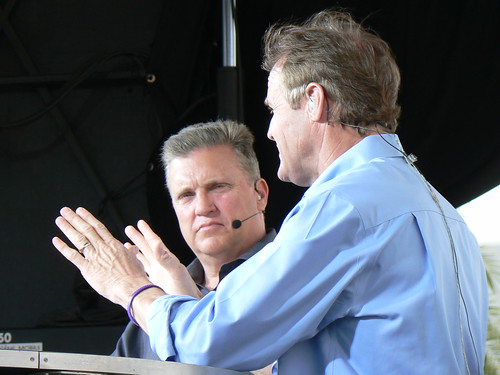 “Broadcasting any sports property for 15 years is a labor of love and a tremendous privilege,” said Eric Shanks, President and COO, Executive Producer, FOX Sports. “NASCAR has been part of the fabric of FOX Sports since we first hit the air at Daytona in 2001, and with our new 10-year commitment, FOX NASCAR is poised to showcase what we expect to be the most riveting competition in years with what certainly is our deepest pool of on-air personalities ever.”

Mike Joy, Hall of Famer Darrell Waltrip and Larry McReynolds, the original FOX Sports broadcast team which began its NASCAR run at the 2001 Daytona 500, return to the booth for NASCAR Sprint Cup Series races on FOX and FOX Sports 1. The team is joined on pit road by reporters Matt Yocum and newcomers Jamie Little and Chris Neville. FOX NASCAR expands its schedule from 13 to 16 races in 2015 with 10 on FOX and six on FOX Sports 1. Chris Myers hosts FOX NASCAR Sunday, the network’s fast-paced prerace show from the traveling Hollywood Hotel, alongside brothers Darrell and Michael Waltrip.

This season, FOX Sports adds coverage of the NASCAR Xfinity Series, second only to the NASCAR Sprint Cup Series as the most-watched racing series in the country, the first 14 races of the year. FOX Sports 1 telecasts 12 of the events while FOX broadcasts the races from Phoenix and Talladega. Adam Alexander calls play-by-play alongside Michael Waltrip and a rotation of NASCAR Sprint Cup Series drivers scheduled to contribute as analysts, including reigning champion Kevin Harvick, four-time champ Jeff Gordon and 2012 champion Brad Keselowski. Vince Welch leads reporting on pit road for every Xfinity Series race, joined by a rotation of Little, Neville and Yocum.

FOX Sports 1 continues with exclusive coverage of the entire NASCAR Camping World Truck Series season for the 13th consecutive year with Alexander, Joy and Brian Till filling in on play-by-play until Steve Byrnes returns from a medical leave of absence. Joy has the call from Daytona for the season opener. Longtime FOX Sports 1 analysts Phil Parsons and Michael Waltrip are back in 2015. Hermie Sadler leads pit road reporting with a regular rotation of Welch, Yocum and Kaitlyn Vincie. FOX Sports 1 telecasts 22 of the series’ 23 races live in 2015, while FOX broadcasts the Talladega race.

NASCAR RaceDay, FOX Sports 1’s popular prerace show, heads back to the track in 2015, live from the middle of the fans at the new and versatile FOX Sports Stage, which puts fans in the center of prerace activities prior to each Sprint Cup race. Danielle Trotta hosts during the FOX portion of the year with McReynolds and Kenny Wallace before handing off hosting duties to John Roberts for the second half of the season. Vincie and FOX Sports 1 newcomers Alan Cavanna and Andrew Doud report alongside FOX NASCAR team pit reporters covering the day’s race.

NASCAR Race Hub expands to the weekend in 2015 to offer at-track updates and news as it breaks throughout the course of the race weekend. Roberts hosts alongside Hammond with reporting by Cavanna and Vincie. In addition, NASCAR Victory Lane on FOX Sports 1 recaps each Sprint Cup Series race with highlights and analysis. Myers hosts with Wallace and Michael Waltrip and post-race reports from the garage.(foxsports.com)

So as you can see FOX is expanding it’s NASCAR coverage and will come to us with some old familiar faces, along with a few new faces to bring us all the news angles that we, the viewers, want to hear daily and weekly.