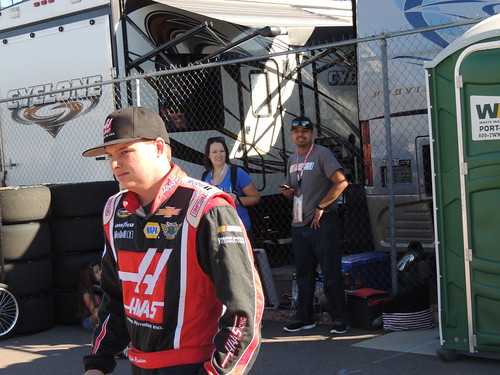 “This is a new and exciting venture for us,” said Earnhardt Miller. “We have come a long way since racing street stocks in 2002, and we are constantly evolving. Expanding into the truck series on a part-time basis is furthering our growth. Bringing in a talent like Cole and a great partner like Haas Automation is a great way to do that. I’m proud of the direction we’re heading.”

Haas Automation has sponsored Custer for four years. The company was founded in 1983 by industrialist Gene Haas, and it manufactures a complete line of vertical and horizontal machining centers, turning centers and rotary tables and indexers in the company’s one million square-foot manufacturing facility in Oxnard, California. Distributed through a worldwide network of Haas Factory Outlets, Haas Automation provides the industry’s best sales, service and support while offering unparalleled cost-to-performance value.

“I’ve watched Cole develop as a driver and young man for several years,” said Haas. “Last year Cole successfully represented Haas Automation, bringing attention to machine tool buyers following the truck series by winning poles and races. When presented the opportunity to sponsor the championship team of JR Motorsports with Cole as the driver, I simply said yes. I have complete confidence in Dale Jr., Kelley, and Cole’s ability to take Haas Automation to victory lane.”

Custer is a native of Ladera Ranch, California. He surged onto the scene in 2014 with a NCWTS win at New Hampshire Motor Speedway in only his seventh start, becoming the youngest driver in NASCAR national touring series history to win a race. Earlier in the year he became the youngest to win a pole, as he took the honor at Gateway Motorsports Park in Madison, Illinois.

“I’m so excited to get this season started,” said Custer. “With all that JR Motorsports has accomplished over the past few years, we know we have everything needed to go win races and compete. I couldn’t ask for a better opportunity with a better organization. I really want to thank Haas Automation, along with Kelley and Dale Jr. for putting this deal together.”

Last season Custer’s truck, sponsored by Haas Automation/Haas CNC came out of the Turner Scott Motorsports truck stables. However, with all the lawsuits and legal hassles that come from the break up of the race team’s co owners, Steve Turner and Harry Scott, Jr., and the shutdown of that organization, it appears that Gene Haas made a deal that Jr Motorsports could not turn down!

Additonally, it does not hurt any that Cole Custer’s dad is Joe Custer.  The senior Custer, Joe, is the Vice President of Stewart-Haas Racing, and most definitely has Gene Haas’ ear and the power of his influence for Cole’s racing future endeavors!