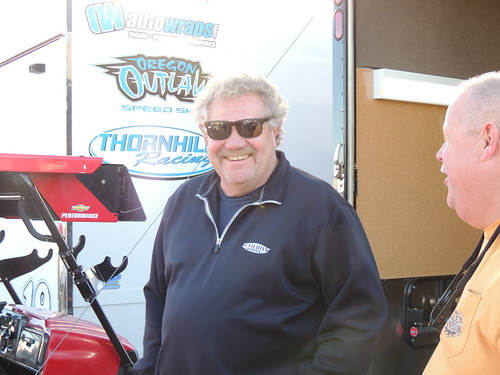 Late last summer Steve Kinser announced that 2014 would be the last year that he would run a full-time schedule in The World of Outlaws sprint car touring series.  That news saddened some of his army of die hard Kinser fans.  However, at age 60, its was just a matter of time before “The Greatest Sprint Car Driver of All Time” would have to step out of the cockpit of his familiar #11 sprint car, and take a different role in that sport.

Well race fans Steve Kinser decided that he would come to The Diamond in The Desert, Cocopah Speedway, for the inaugural Winter Heat Sprint Car Showdown to race staged in the warmth of SW Arizona in January.  After the first two nights of racing, where lady luck wasn’t smiling down on Kinser, which included destroying his race car on night number two.  Nevertheless, “The King” fought off a hard battle in the first half of the race with Young Money, Kyle Larson, before Larson blew a right rear tire.  As the race unfolded, Kinser outran the field to log a victory on night number three!

The win was Kinser’s first at the track since the 3/8-mile oval hosted its lone World of Outlaws event in February 1991.

“I’d still like to be a little younger, I can tell you that, but I’m not,” he joked. “But I’m not going to complain about my career. It’s nice to get a win here.”

Paul McMahan finished second, which propelled him into the lead of the event standings heading into the final weekend, with 12th-starting Brian Brown rounding out the podium to earn the $2,000 Hard Charger Award bonus thanks to Kim and Glen Hanson of Here 2 Wire Inc. in Lake Stevens, Wash.

“Hopefully the casino doesn’t get it back,” Brown said with a big grin. “I don’t know who the Here 2 Wire people are, but I’m definitely going to shake their hands and thank them. That’s what makes the event an event.”

Kinser, who is affectionately known as ‘The King’ of sprint car racing and who drives for NASCAR veteran Tony Stewart, shared the front row of the main event with NASCAR sensation Kyle Larson – the most recent Winter Heat Sprint Car Showdown feature last Saturday. The duo traded the lead each of the first three laps with Larson sliding Kinser in turns one and two before Kinser powered to the top spot prior to the flag stand on Laps 1 and 2.

Larson’s slide job on Lap 3 gave him the lead for approximately a dozen laps before his right rear tire went flat on Lap 15. Larson slowed to bring out a caution and was forced to the work area, where his team replaced the tire.

That gave Kinser the lead back for good. He went to the top groove as traffic entered the picture with approximately eight laps remaining, which allowed McMahan to close the deficit. However, Craig Dollansky, who was running in third place, flipped out of the track in turn one on Lap 24 to cause the final caution of the race.

Kinser took a commanding lead on the restart and sailed to the victory one race after violently flipping out of the track himself.

“From being in between the walls upside down to winning tonight I’ve got no complains whatsoever,” he said.

Stay tuned race fans for the final two nights of racing from The Diamond in The Desert!