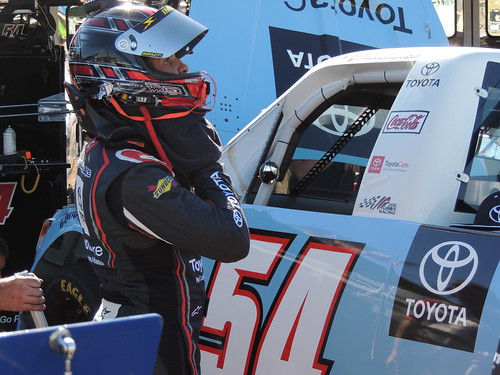 It has been just ten days since Joe Gibbs Racing announced that Darrell Wallace Jr. had been released from his contract with JGR, today Roush Fenway Racing announced that the 21-year-old driver nicknamed “Bubba” will compete for their organization next season in the newly rebranded NASCAR Xfinity Series (former Nationwide Series).

Wallace will drive RFR’s No. 6 Ford Mustang, although a team spokesman told FOXSports.com that details on whether the ride is a full-time one “are still being worked out.”

“We are certainly pleased to have Bubba Wallace come on board,” said team co-owner Jack Roush. “He is certainly a great young talent and I feel it will be mutually beneficial for us to be able to put him into a team environment with a veteran driver like Elliott (Sadler) and the young guys Chris Buescher and Ryan Reed. We have had a great deal of history in the NASCAR Xfinity Series and we are happy to have Bubba as the latest piece of that rich legacy.”

Competing as a JGR development driver, Wallace won five races — including four in 2014 — over the course of the past two seasons in Kyle Busch Motorsports’ No. 54 NASCAR Camping World Truck Series Toyota entry.

Wallace scored his first career truck victory in the fall of 2013 at Martinsville Speedway, where he became the first African-American driver to win a major NASCAR series race since Wendell Scott nearly 50 years earlier.

The alumnus of NASCAR’s Drive for Diversity made six starts for JGR in the Nationwide Series, earning four top-10 finishes and a pole at Dover.

“I’ve had a remarkable journey over the last few years thanks to people who have put me in a position to win the races that I have,” said Wallace. “When I first joined the sport, many said I would never compete with the real drivers. Now, as I join the winningest team in NASCAR history, I take that as a responsibility to add more wins to the team’s legacy and help tear down the barriers for the next generation of NASCAR drivers.”

“We are very excited to bring Bubba Wallace into the Roush Fenway fold,” RFR team president Steve Newmark said. “He is viewed in industry circles as one of the brightest young drivers, and I feel that we are very fortunate to be able to bring him on board. He has a charismatic personality and at the same time has exhibited the ability to win on the racetrack. We are looking forward to getting him in our race cars next season.”

With this newest addition to the RFR Xfinity team, Roush Fenway Racing has elevated it’s stature in that series for 2015!  Quite possibly Wallace may be in the hunt for the Xfinity Series championship in 2015.

With all of the success that Wallace has had with Kyle Busch Motorsports in the Camping World Truck Series as a developmental driver for JGR over the past two years, it was very surprising that Joe Gibbs Racing was unable to secure a fulltime sponsor for him in the Xfinity Series for 2015.

I guess that with Daniel Suarez bringing in BIG sponsorship dollars from one of the world’s richest men, Mexico’s Carlos Slim, that most likely took precedence in the Joe Gibbs Racing camp for 2015!